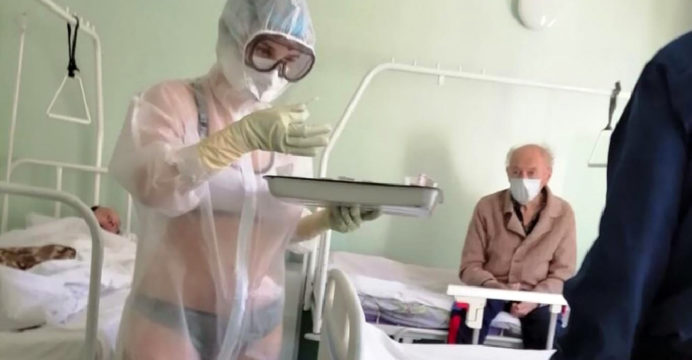 A Russian nurse who was responsible for treating coronavirus patents has been verbally reprimanded for wearing only a bikini under a see-through protective gown while attending coronavirus victims.

The unknown nurse is from the Tula region in the south of Moscow obtained immediate online fame following a photo of her showing that she is making the rounds in the provocative outfit with an aged patient looking on in the background. The photo went viral in less than 24 hours. the local press reported Tuesday.

According to the sources, she had put on just only a bikini under her protective gown because it gets too hot in the protective equipment while working for a long shift. Unfortunately, the provided gown was see-through and that’s why she was looking like exposing herself.

However, the Russian Tula region’s health department said they took disciplinary action in the form of a reprimand against the accused nurse for violating the nurse dress code, the outlet reported later that day.

Officials also held an informative discussion with her colleagues on specifications for hygienic apparel and outer appearance and stepped up restrictions over staffers responsible for Personal Protective Equipment (PPE).

In the meantime, activist doctor Anastasia Vasilyeva accused the nurse’s employers management of issuing low-quality PPE to medics. “You can see in the picture she was wearing some kind of plastic suit,” Vasilyeva said in a statement. She also said, “An anti-plague suit shouldn’t be transparent and must be made of a completely different fabric.”