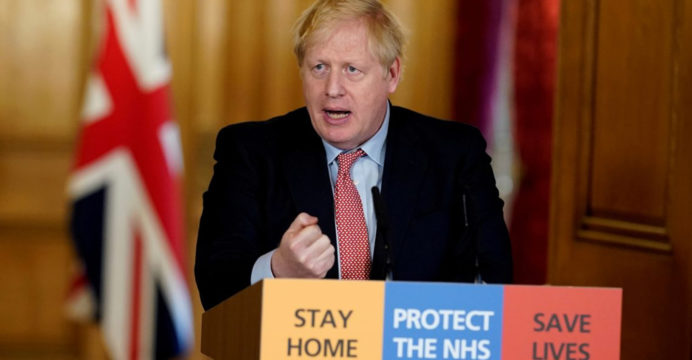 British Prime Minister Boris Johnson announced on Friday that he is self-isolating after testing positive for COVID-19.

“Over the last 24 hours I have developed mild symptoms and tested positive for coronavirus,” he said on Twitter, posting a video message.

“I am now self-isolating, but I will continue to lead the government’s response via video-conference as we fight this virus,” he wrote.

“Be in no doubt that I can continue thanks to the wizardry of modern technology to communicate with all my top team to lead the national fightback against coronavirus,” he added in the video message.

Over the last 24 hours I have developed mild symptoms and tested positive for coronavirus.

I am now self-isolating, but I will continue to lead the government’s response via video-conference as we fight this virus.

Together we will beat this. #StayHomeSaveLives pic.twitter.com/9Te6aFP0Ri

A Downing Street spokesperson said in a statement that Johnson, whose partner Carrie Symonds is pregnant, experienced mild symptoms on Thursday and was tested for COVID-19 on the personal advice of England’s chief medical officer.

The test was carried out in No 10 by NHS staff, the spokesperson added.

In his video message, Johnson thanked workers in Britain’s state-run National Health Service (NHS) for their efforts in battling the spread of the virus.

A total of 11,658 coronavirus cases have so far been confirmed in Britain, and 578 deaths.

When #BorisJohnson gives press conferences like this it should be absolutely no surprise that he has tested positive for #COVID19 #covid19UK pic.twitter.com/MsPOG1wdeL

Earlier this week Prince Charles, the eldest son and heir to Queen Elizabeth II, also tested positive for the virus.

The government confirmed this week that if Johnson was incapacitated, Foreign Secretary Dominic Raab would temporarily assume the role of prime minister.