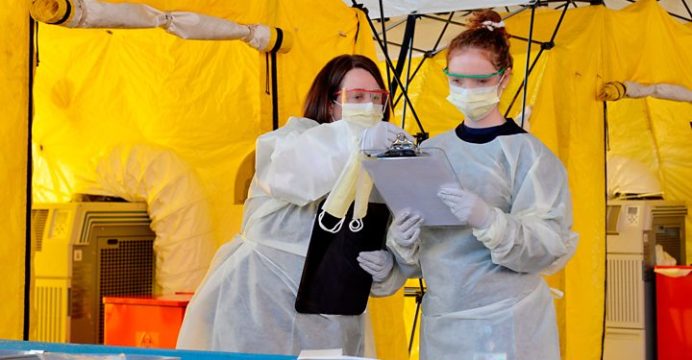 One in five Americans ordered to stay at home

A number of US states have ordered shutdowns with one in five Americans soon set to be under a “stay at home” order.

Connecticut and New Jersey on Friday joined Illinois and California in ordering residents to stay at home in order to combat coronavirus, reports BBC.

New York State ordered non-essential businesses to close. The virus has claimed nearly 230 lives in the US and infected more than 18,500 people.

Globally more than 275,000 patients have tested positive for the respiratory illness and more than 11,000 have died.

A ban on non-essential travel across the US-Canada border came into effect at midnight on Saturday.

Speaking at the White House later in the day, President Donald Trump said governors, mayors and citizens were working with “urgency and speed” in what he described as a “war against the virus”.

Also at the news conference, Vice-President Mike Pence said he and his wife would be tested after one of his aides tested positive for the virus.

“Neither the president or I had direct contact” with staffer, Mr Pence said, adding that the staffer was “well”.

WHAT MEASURES ARE THE US STATES TAKING?

On Friday Connecticut, Illinois and New York announced measures directing tens of millions of people to stay at home. The restrictions order most workplaces to close and require residents to remain inside except for trips to grocery stores, pharmacies and gas stations.

In New York, Governor Andrew Cuomo restricted public gatherings and ordered all “non-essential workers” to stay at home. The measures come as confirmed coronavirus cases in New York reached 7,000 – the highest of any US state.

“These provisions will be enforced,” Mr Cuomo told reporters. “These are not helpful hints.”

Late on Friday, President Trump declared a major disaster in New York State, a move that will release federal funding.

New York and the neighbouring New Jersey, Connecticut and Pennsylvania also issued a joint order on Friday for the closure of all “personal care” businesses, such as hair and nail salons and piercing and tattoo parlours.

All outdoor team sports such as basketball games are also banned under the measures, which take effect on Sunday night.

On Thursday California Governor Gavin Newsom issued a similar order, telling all residents to stay at home. He estimated more than half of the 40 million people in his state would contract Covid-19 in just the next two months.

Images from Los Angeles show some of the city’s most famous landmarks completely deserted while the freeways are almost empty.

Illinois, whose biggest city is Chicago, has also ordered all residents indoors with exceptions to shop for food and medicine or take exercise.

President Trump has so far ruled out any nationwide lockdown.

He said on Friday: “I don’t think we’ll ever find [a US shutdown] necessary”. He added that the US was “winning” the war against the virus.