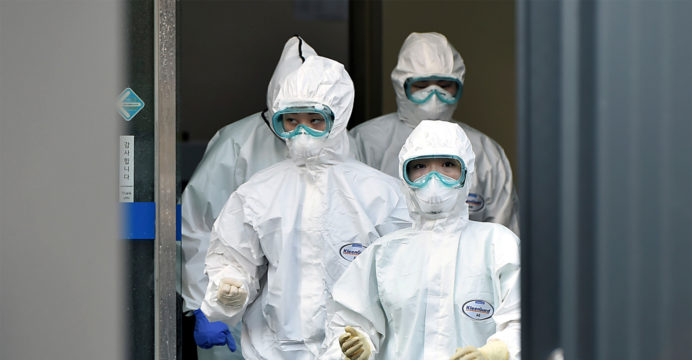 President Moon Jae-in chaired the first “emergency economic council” meeting, saying the emergency financial aid package would be the first step to be taken in order to prevent small- and medium-sized companies, microbusiness owners and the self-employed from going bankrupt and help ease their finance-related anxieties, according to the presidential Blue House.

It followed the parliamentary passage of a supplementary budget bill worth 11.7 trillion won (9.1 billion U.S. dollars) on Tuesday and the Bank of Korea (BOK)’s emergency rate cut from 1.25 percent to an all-time low of 0.75 percent on Monday.

Moon, who has emphasized the need for “unprecedented” measures to tackle an “unprecedented” situation, noted that the focus was placed on resolving capital shortages of small firms, microbusiness owners and the self-employed which have been hit hardest by the COVID-19 outbreak.

In the latest tally, South Korea’s confirmed COVID-19 cases topped 8,500. The daily caseload has steadied in recent days, but unease remained over the virus spread.

Under the emergency aid package, financial support for small businesses would be expanded to 12 trillion won (9.3 billion U.S. dollars) to enable them to borrow money at an interest rate of about 1.5 percent from all financial institutions.

Moon stressed the need for additional steps, instructing officials to draw up measures to support people who lost jobs or income over the COVID-19 outbreak.