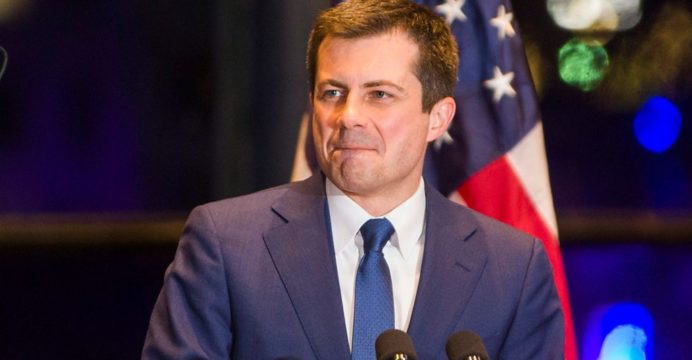 Pete Buttigieg is ending campaign for the White House

Pete Buttigieg, the former Indiana mayor who made an ambitious run for president, has announced he is ending his campaign for the White House.

The 38-year-old became the first openly gay presidential candidate from a major party when he announced he was running for the Democratic nomination, reports BBC.

But despite a successful start, his campaign lost momentum in recent weeks.

His decision to drop out comes ahead of a key day on Tuesday in the Democratic race to take on Trump.

Fourteen states will vote on Super Tuesday, by the end of which staunch left-winger Bernie Sanders could have an unbeatable lead and be a step closer to the nomination.

His departure leaves six Democrats still in the running.

Speaking to supporters in his hometown of South Bend, Indiana, Mr Buttigieg stressed the values he said his campaign had hoped to promote.

“And so we must recognise that at this point in the race, the best way to keep faith with those goals and ideals is to step aside and help bring our party and our nation together,” he said. “So tonight I am making the difficult decision to suspend my campaign for the presidency.”

He pledged he would do “everything in my power” to ensure a Democratic win in November’s election.

Mr Buttigieg surprisingly, and narrowly, won the first event of the primary season, the caucuses in Iowa on 3 February. But he failed to repeat that success and win the delegates needed to make him the front- runner and later confirm his nomination. He finished a distant fourth in South Carolina on Saturday.

HOW BUTTIGIEG SET HIS SIGHTS ON THE WHITE HOUSE

It was one of the least likely runs for the presidency in years: Mr Buttigieg’s only political experience had been as the centrist mayor of the 306th largest city in the US, South Bend, Indiana between 2012 and January this year.

Before then, he had served as a US Navy intelligence officer and in the Afghan war.

He was the first millennial to run for the White House, and would have been the youngest president to take office had he won.

The son of a Maltese immigrant, he had long been rumoured as a possible candidate in the 2020 election. But after announcing his candidacy in April last year, he was able to break through a crowded group to become one of the most recognisable faces in the campaign.

In that time, he raised more than $82m (£64m), according to the Federal Election Commission, one of the highest totals of all the candidates.

In recent weeks, his sexuality had been highlighted as an issue by critics – conservative radio host Rush Limbaugh asked if voters would pick a man “kissing his husband on stage”.

Mr Buttigieg – pronounced Boot-Edge-Edge – came out as gay aged 33 and married his husband Chasten in June 2018.

He also struggled to build support among African-American voters, a point emphasized by his poor showing in South Carolina.

His record as mayor came under fire among minority voters – he had fired South Bend’s first African American police chief and was criticised over how he handled the case of a white police officer who shot dead a black man last year.