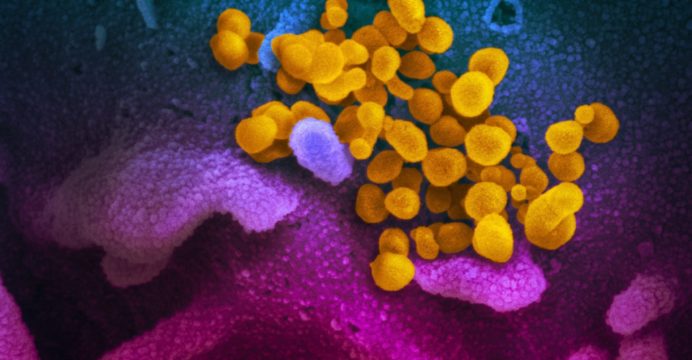 The SARS-CoV-19 outbreak, a global threat

A pneumonia outbreak occurred in Wuhan city, Hubei province of China on the December 2019. The Huanan Seafood Wholesale Market is claimed for the initial site of infection from an animal source. Observation of 41 viral pneumonia cases showed that 27 patients had direct exposure to this market, some were the sells-man and some were customers. The epidemic started from 12th December, 2019 with a new virus. The virus was isolated from bronco-alveolar lavage fluid of several pneumonia and ill patients at the early stage of outbreak.

The genome of those viruses were sequenced and found a new strain of coronavirus which had 79.5% similarities with the SARS virus and shares ACE-2 receptor for viral entry to the human cells same as SARS virus. SARS First reported in 2002 in southern China. It was believed to have spread from bats, which then infected civets. Humans got infection by civets. The outbreak of SARS affected 26 countries which responsible for 8,098 cases and 774 deaths, case fatality was 10%. The new virus is temporally named as nCoV-2019 on 7, January, 2010.

A response global pandemic, both China and other countries apply travel restrictions, quarantines and curfews. As a rapid rise of number of new cases, WHO declared the outbreak as a public health emergency on the 23 January, 2020. The WHO also said that ‘More powerful’ than terrorist attack’. Finally, 11th February 2020, the Coronavirus Study Group (CSG) of International Committee on Taxonomy of Viruses officially names as “SARS_CoV-2” at the same day the disease named as COVID-19 by the WHO. Earlier it was thought that virus was originated from snake or recombination between snake and bat coronaviruses. From mid-January to mid-February several studies conducted by the scientists of several universities of China.

The results of genomic studies confirmed that virus is originated from bat as 96% similarities with the bat coronavirus, but the intermediate host that may infect human is unknown.

However, On February 2020, researchers from South China Agriculture University showed that viral sequences were 99% similar to the pangolins suggesting that the pangolin may be an intermediary host for the virus, but did not release evidence. The initial site of viral infection, Huanan Seafood Market is a wet market which wholesale fish and live animal. So, this is the ideal place where the human expose to the different species of animals, birds and fishes, so mutation and transmission of viruses between interspecies could possible. Till date, February 23, 2020, 12:40 GMT, at the time of article writing, the novel virus has gone to pandemic affecting 33 countries and also one cruise ship “Diamond Princess” which is currently harbored in Yokohama, Japan. Data showing from ‘Worldometer’ revealed that there have been 78,966 confirmed COVID-19 cases in which 2,468 deaths, 11,559 is in serious condition, 41,535 in mild disease and 23,404 was recovered.

The ‘Incubation Period’ of SARS-CoV-19— the time between entry of virus and appearance of disease thought to be 2-14 days. Human to human transmission of occurs via respiratory droplets and close personal contact. Fecal transmission and mother to newborn transmission also reported in rare. Asymptomatic person can also transmit disease to others. The symptoms are fever (>38°C), sore throat, running nose, cough and breathing difficulties.

Further it may complicate with pneumonia, acute respiratory distress syndrome to death. The older with cardiovascular and diabetes patient and male people are more vulnerable, 80% death had occurred over the 60 years of age & 75% of them had pre-existing medical conditions of heart disease and diabetes according to China’s National Health Commission.

Till date, no effective vaccines are approved. However vaccines are under development by different countries, such as, China, Hong Kong, United States and Australia. Treatment of the patient is usually symptomatic and also according to the severity of the disease. Oxygen therapy, intra-venous fluid and breathing support via ventilation is required. China approved first antiviral drug against SARS-CoV-19 is ‘Favilavir’ (formerly ‘Fapinavir’) On 18 February 2020 by the Chinese National Medical Products Administration. Anotherr good treatment option is transfusing the plasma of people who’ve survived from COVID-19.

Several antivirals, such as, Remdesivir and several anti-HIV drugs (Atazanavir, Indinavir and ritonavir) are also reported to give good results, but still in controversy. As the virus is highly infectious and contagious, Bangladesh should be aware of this. Some are thought that only low temperature is ideal for viral outbreak and Bangladesh is risk free now as spring.

However, if we observe the outbreak of COVID-19 is also present in the Singapore, the temperature of this country is little hot than Bangladesh. For the prevention of outbreak that might cause the huge disaster, awareness for prevention is important. Prevention of COVID-19 is mainly by practicing personal hygiene, such as, respiratory and hand hygiene and also infection control and prevention in hospital by WHO guidelines.

Dr. Bushra Tanzem is an Associate Professor of Department of Microbiology, Northern International Medical College. She is the writer of this article