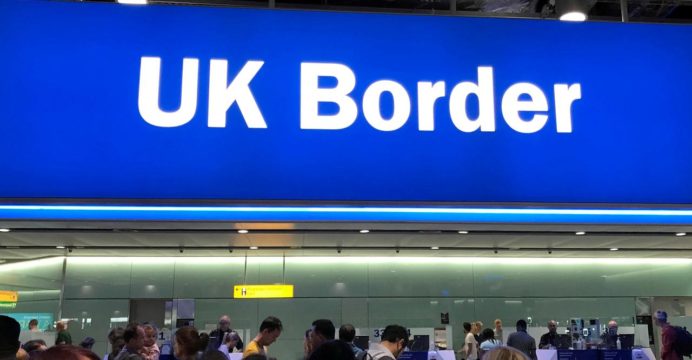 Low-skilled workers would not get visas under post-Brexit immigration plans unveiled by the government.

It is urging employers to “move away” from relying on “cheap labour” from Europe and invest in retaining staff and developing automation technology, reports BBC.

The Home Office said EU and non-EU citizens coming to the UK would be treated equally after UK-EU free movement ends on 31 December.

Labour said the “hostile environment” will make it hard to attract workers.

But Home Secretary Priti Patel said the new system would mean “the brightest and the best will be able to come to the United Kingdom”.

The government, which said it was aiming to reduce overall migration to the UK, wants a “points-based” immigration system – as it promised in its election manifesto.

Under the scheme, overseas workers who wanted to come to the UK would have to speak English and have the offer of a skilled job with an “approved sponsor”.

They would be awarded 50 points if they fulfil these criteria.

In total, immigrants would have to reach 70 points to be able to work in the UK, with points also being awarded for qualifications, the salary on offer and working in a sector with shortages.

But the government said it would not introduce a route for lower-skilled workers, urging businesses to “adapt and adjust” to the end of free movement between EU countries and the UK.

“It is important employers move away from a reliance on the UK’s immigration system as an alternative to investment in staff retention, productivity and wider investment in technology and automation,” it said.

Instead, it said the 3.2 million EU citizens who have applied to continue staying in the UK could help meet labour market demands.

The government also pointed to a quadrupling of the scheme for seasonal workers in agriculture to 10,000, as well as “youth mobility arrangements”, which allow 20,000 young people to come to the UK each year.

While the CBI welcomed some of the proposals, it said some firms would be “left wondering how they will recruit the people needed to run their businesses”.

The business lobby group’s director general, Carolyn Fairbairn, said: “Firms know that hiring from overseas and investing in the skills of their workforce and new technologies is not an ‘either or’ choice – both are needed to drive the economy forward.”

Speaking to Radio 4’s Today programme, Madeleine Sumption, director of the University of Oxford’s Migration Observatory, suggested that the transition to the new system could be difficult for employers who have become reliant on low wage workers.

She said: “Some employers will be able to adjust [to the system] maybe by introducing more labour-saving techniques, such as machinery.

“In some cases that won’t be feasible and for them the questions are: can they find other sources of workers; will they produce less, or will they go out of business?”

The Royal College of Nursing raised concerns the proposals will “not meet the health and care needs of the population”, while Unison assistant general secretary Christina McAnea said the plans “spell absolute disaster for the care sector”.

The UK Homecare Association described the lack of provision for low-paid workers in the proposals as “irresponsible”, with a spokesman saying they were “dismayed” by the government’s decision.

“Cutting off the supply of prospective care workers under a new migration system will pave the way for more people waiting unnecessarily in hospital or going without care,” they added.

And the Food and Drink Federation spoke of concerns about bakers, meat processors and workers making food like cheese and pasta not qualifying under the new system.