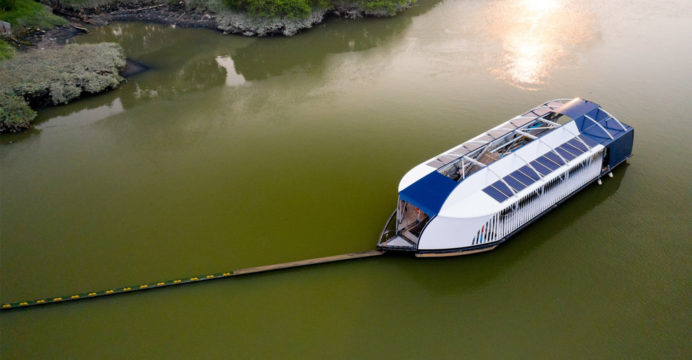 It is built by The Ocean Cleanup, who say it will “close the tap” on the greatest source of garbage reaching the oceans: rivers.

The barge, which will be anchored in polluted rivers, is capable of scooping up to 50 tonnes of garbage per day floating downstream, said its inventor, 25-year-old Boyan Slat.

“Under the right conditions we think it could even achieve double that,” said Slat, who is the CEO and founder of The Ocean Cleanup.

“The Interceptor” resembles a large houseboat attached to a curved barrier. It is 24 metres (78 feet) long, solar-driven, fully autonomous and able to collect plastic in rivers around the clock, Slat said. 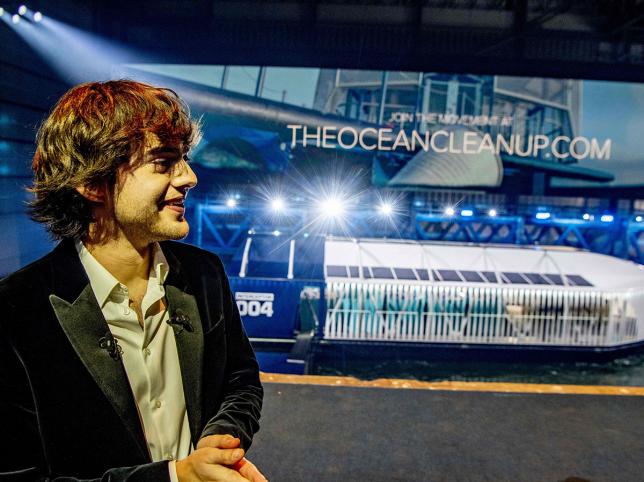 Placed at strategic positions in a river system, its barrier directs plastic to the waiting “mouth” of the barge, from where it rolls up a conveyor belt and is dumped into one of six dumpsters.

The barge has a capacity to carry 50 cubic metres of waste plastic, the equivalent of 271,000 Rubik’s cubes, said Slat.

Once full, an onboard computer sends a message to local operators to pull out the dumpsters and empty them “as easily as you would clean your vacuum,” Slat said at the unveiling of the machine.

Say hello to The Ocean Cleanup Interceptor. Our solution for preventing river pollution from entering the ocean. pic.twitter.com/PhWcaBwLPe

The project will tackle 1,000 of the most polluting rivers in the world “within five years”, which contribute to 80 percent of global plastic pollution, he added.

Two of the machines are already up and running: one in Jakarta, Indonesia, and another in Malaysia. A third is being prepared for deployment in Vietnam.

Slat used a fourth Interceptor for the presentation in the port city of Rotterdam’s harbour on Saturday. This one will be sent to the Dominican Republic, he said.

Earlier this month, The Ocean Cleanup announced that a special ship designed to clean the world’s oceans had harvested its first plastic from the Great Pacific Garbage Patch.