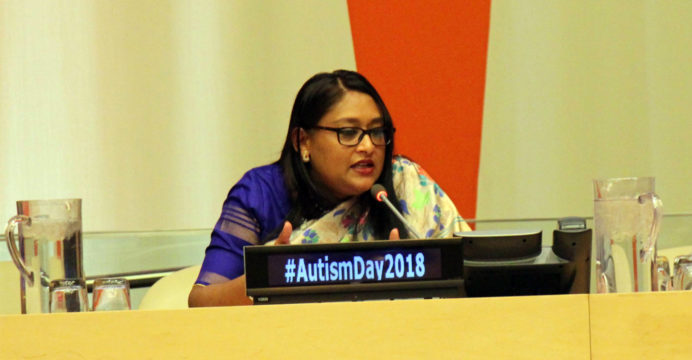 Saima Wazed Hossain, Chairperson of the Bangladesh National Advisory Committee for Autism and Neurodevelopmental Disorders, has been noted among 100 “Innovative Women Leaders in Global Mental Health”.

On Friday, the publication blog of Columbia University’s Global Mental Health Programs Consortium based in New York City announced the list of the 100 women leaders on its website newly.

The list includes women leaders who are individually and collectively developing understanding, prevention, and treatment of mental illness. It seems in alphabetical order rather than ranked, according to the Website of Global Mental Health Programs.

Saima Wazed, daughter of Prime Minister Sheikh Hasina, is including a Member of the World Health Organization’s Expert Advisory Panel on Mental Health.

Recently, she was chosen as WHO’s Goodwill Ambassador for Autism in the South East Asia Region for her innovative work as a spokesperson for individuals with autism in Bangladesh.

She is the chairperson of her own NGO- Shuchona Foundation – not-for-profit advocacy, research and capacity-building organization based in Dhaka. She is also one of the trustees of Centre for Research and Information (CRI), a research wing of the ruling Awami League.

She is a specialist in School Psychology, nationally certified in the United States.

A graduate from Barry University in Florida, she is an expert on neurodevelopmental disorders and mental health and an accomplished speaker whose efforts has led to international awareness, policy and program changes, and the adoption of three international resolutions at the United Nations and World Health Organization, CRI said in a Facebook post today.

Saima Wazed is credited with bringing mental health issues to the mainstream and breaking social barriers to acceptance of persons with disabilities.