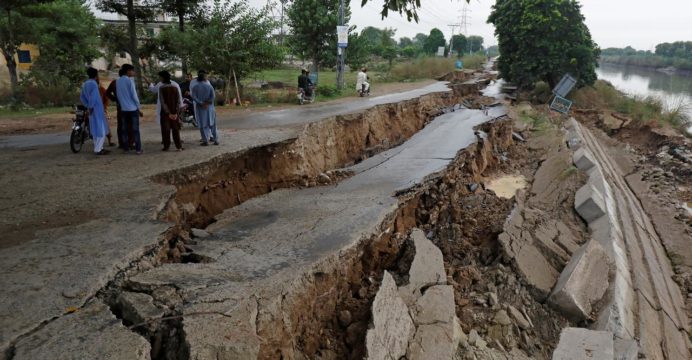 At least 24 people were killed and 450 injured in an earthquake that hit Pakistani Kashmir, local officials said on Wednesday, but they added that rescue work was in full swing and panic was subsiding.

Tuesday’s earthquake leveled homes and shops and split open roads in an area between the towns of Jhelum and Mirpur to the north, which is in Pakistan’s portion of the disputed territory of Kashmir, reports Reuters.

“The situation is slowly returning to normal, the level of panic is now less among the people, although an aftershock was felt at night,” said Sardar Gulfaraz Khan, a police deputy inspector general.

Most of the damage happened in villages where old houses collapsed, Khan said.

People gather near a damaged road after an earthquake of magnitude 5.8 in Mirpur

Many people from the area slept outdoors overnight and some were returning home on Wednesday morning to collect belongings and inspect the damage, according to a Reuters witness.

Troops and other emergency responders carried out rescue operations through the night, with engineers starting repair work on a key roadway that was severely damaged, the Pakistan Army’s communications arm said. Three bridges were damaged.

The military had earlier estimated that 22 people were dead and 160 injured after the earthquake.

Pakistan’s Prime Minister Imran Khan, in a tweet, offered condolences to families of the victims and said he had directed the government to quickly offer relief efforts and assess the damage.

Kashmir has been in dispute between India and Pakistan since the two countries were carved out of British colonial India in 1947, and has been the cause of two wars between them.