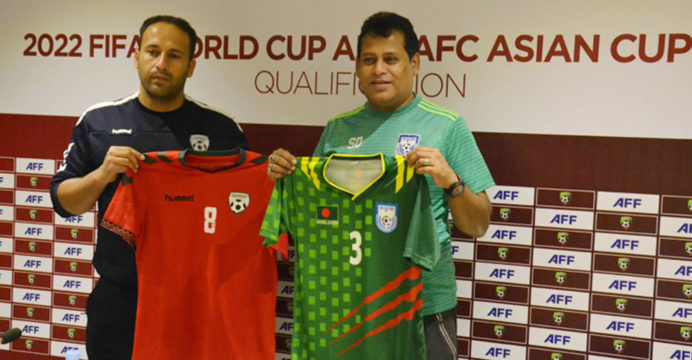 Bangladesh are all set to start their joint Qualification (Round-1) of the FIFA World Cup-2022 and AFC Asian Cup 2023 campaign taking on Afghanistan in the first leg scheduled to be held tomorrow in Tajikistan capital of Dushanbe.

Bangla TV will telecast all the Bangladesh’s Group E home and away matches. The tomorrow’s Bangladesh match against Afghanistan kicks off at 8 pm (BST).

Ahead of the first leg Bangladesh head coach James Day with interviews said his boys are trained well and he is very pleased with their performance in the friendly games. It is going to be a very tough match against a good team but they are looking forward to winning the match, he said.

Commenting about Afghanistan’s 6-0 lose against Qatar, the Bangladesh head coach said Afghans are good team ….they played as an excellent side in Qatar, who are preparing to host the FIFA World Cup. I don’t believe it will down their moral following their previous game defeat.

In 2015, Bangladesh lost 4-0 to Afghanistan but they had also defeated Afghanistan 4-1 in 1979 while four other games ended in draws, however coach said the past record would not influence tomorrow’s match.