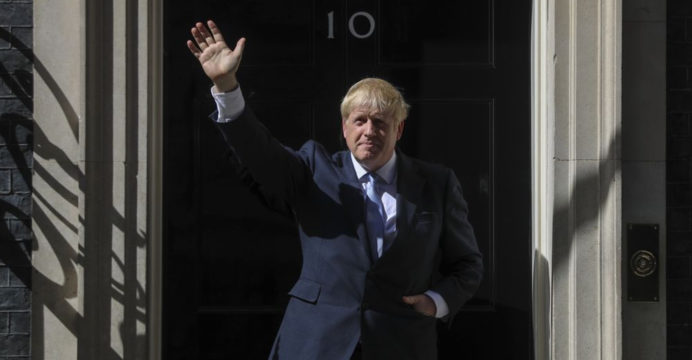 Britain’s Johnson tries to save job and hardline Brexit

UK Prime Minister Boris Johnson will try to save his job and his hardline Brexit strategy Monday when he confronts parliament and his Irish counterpart in another showdown week.

The charismatic but divisive British leader finds himself facing a political impasse, just six weeks after taking over from his beleaguered predecessor Theresa May.

The new prime minister has vowed to take Britain out of the European Union after 46 years — with or without a divorce deal — by October 31, but has been blocked by parliament.

Johnson’s bid to break the deadlock through a snap general election on October 15 is also facing an almost certain second successive defeat by lawmakers Monday.

It comes after a week in which he took a battering from resignations and sackings that included his own brother and Winston Churchill’s grandson, leaving him without a working majority in parliament.

Two of his most senior ministers both rejected speculation Sunday that Johnson had no real option but to resign.

But neither could say clearly how he intended to keep all his Brexit promises without somehow bending UK law.

“Of course he is not going to break the law,” Foreign Minister Dominic Raab told Sky News.

“We have a plan, which is to stick to what we have been doing,” Interior Minister Sajid Javid told the BBC.