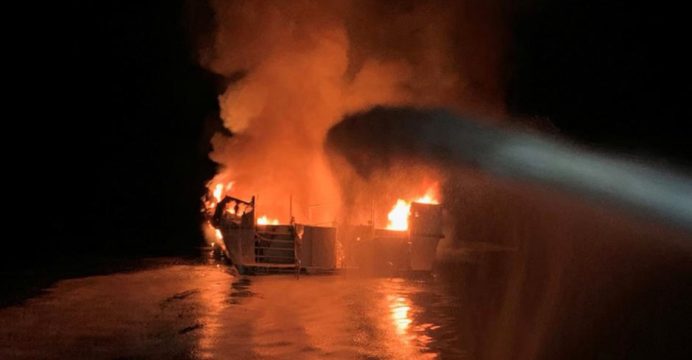 Twenty-five bodies have been found on the ocean floor after a boat was destroyed by fire off the coast of California, the US Coast Guard says.

The fire started in the early hours of Monday. The boat was anchored just metres off Santa Cruz Island, about 90 miles (145km) west of Los Angeles. 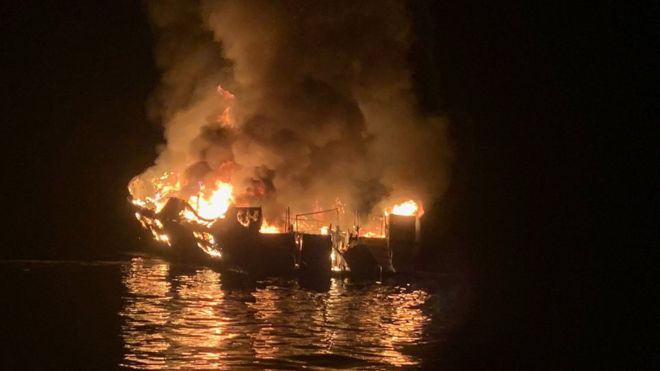 The Conception – a commercial diving boat – is now submerged. The cause of the blaze is so far unknown. At a news conference, Sheriff Bill Brown said 39 people were on board the vessel when fire broke out.

WHAT HAPPENED ON THE SHIP?

Coast Guard services overheard a mayday call at 03:30 local time (10:30 GMT) on Monday, saying that the boat was engulfed in flames.

Reports suggested some passengers could have been trapped below deck.

Those who escaped the fire may have been sleeping in the main cabin of the boat rather than below.

They were awake and had jumped off the boat’s bridge before a Good Samaritan vessel called The Grape Escape arrived to rescue them.

The owner of the Grape Escape, Bob Hansen, told the New York Times that the boat was engulfed in flames, “from stem to stern”.

“I could see the fire coming through holes on the side of the boat.

“There were these explosions every few beats. You can’t prepare yourself for that. It was horrendous,” he said.

Sheriff Brown said that oxygen or propane tanks could have exploded during the fire, but there was no sign this sparked the blaze.

“Nothing in the [mayday] broadcast from the vessel… indicated there was an initial explosion,” he said.

WHAT ABOUT THOSE WHO ARE MISSING?

Capt Rochester said the boat was “fully in compliance” with safety regulations, and had no prior violations.

Sheriff Brown said the fire was “probably the worst case scenario you could possibly have” on a vessel, as it was in open water at night with most people asleep below decks.

“Fire is the scourge of any ship,” he said. “Of all scenarios… you couldn’t ask for a worse situation.”

Run by a diving company called Truth Aquatics, which has a 4.5 rating on Trip Advisor, Conception was used for chartered trips in the Channel Islands National Park.

It was on the final day of a three day scuba diving excursion for the Labor Day weekend.

The boat’s layout shows three rows of double bunks with a shower room at the front of the boat.