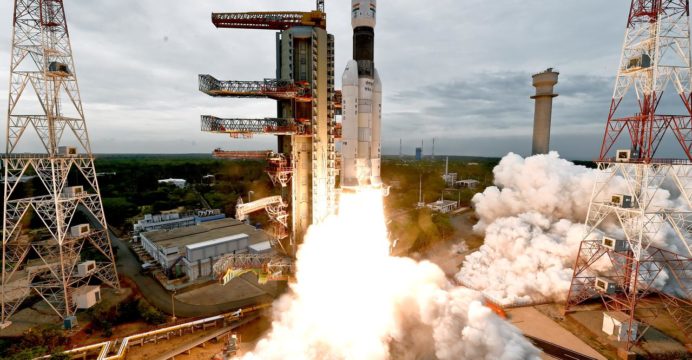 India’s second lunar module has begun orbiting the Moon, nearly a month after blasting off, officials have confirmed. The maneuver to put the module into the lunar orbit was completed at 09:02 local time (04:32 GMT) on Tuesday.

Chandrayaan-2 was launched from the Sriharikota space station on 22 July, a week after the scheduled blast-off was halted due to a technical snag. India hopes the $145m (£116m) mission will be the first to land on the Moon’s south pole, reports BBC.

WHAT IS THIS MISSION ALL ABOUT?

India’s first lunar mission, Chandrayaan-1, was launched in 2008 but it did not land on the lunar surface. However, it carried out the first and most detailed search for water on the Moon using radars.

Chandrayaan-2 (Moon vehicle 2) will try to land near the little-explored south pole of the Moon. The mission will focus on the lunar surface, searching for water and minerals and measuring moonquakes, among other things.

India used its most powerful rocket, the Geosynchronous Satellite Launch Vehicle Mark III (GSLV Mk-III), in this mission. It weighed 640 tonnes (almost 1.5 times the weight of a fully-loaded 747 jumbo jet) and, at 44 meters (144ft), was as high as a 14-story building.

The spacecraft used in the mission has three distinct parts: an orbiter, a lander and a rover.

The lander (named Vikram, after the founder of Isro) weighs about half as much, and carries within its belly a 27kg Moon rover with instruments to analyze the lunar soil. In its 14-day life, the rover (called Pragyan – wisdom in Sanskrit) can travel up to a half a kilometer from the lander and will send data and images back to Earth for analysis.

HOW LONG IS THE JOURNEY TO THE MOON?

The journey of more than six weeks is a lot longer than the four days the Apollo 11 mission 50 years ago took to land humans on the lunar surface for the first time.

In order to save fuel, India’s space agency has chosen a circuitous route to take advantage of the Earth’s gravity, which will help slingshot the satellite towards the Moon. India does not have a rocket powerful enough to hurl Chandrayaan-2 on a direct path. In comparison, the Saturn V rocket used by the Apollo program remains the largest and most powerful rocket ever built.

“There will be 15 terrifying minutes for scientists once the lander is released and is hurled towards the south pole of the Moon,” Isro chief K Sivan said prior to the first launch attempt.

He explained that those who had been controlling the spacecraft until then would have no role to play in those crucial moments. So, the actual landing would happen only if all the systems performed as they should. Otherwise, the lander could crash into the lunar surface.