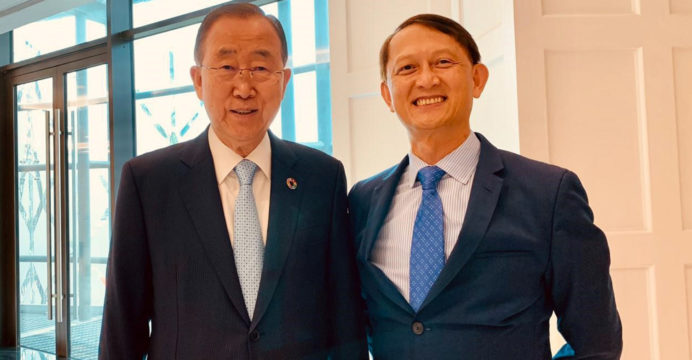 BRAC University President and Vice-Chancellor Vincent Chang met Chairman of the Global Commission on Adaptation and former UN Secretary-General Ban Ki-moon. They discussed global citizenship and opportunities for collaboration between BRAC University and the Ban Ki-moon Centre for Global Citizens.

Based in Vienna, the Ban Ki-moon Centre for Global Citizens was jointly founded by the former UN Secretary-General and Heinz Fischer, the Austrian President from 2004-2016, and focuses on empowering youth and women.

Their meeting concluded with a warm gesture from Ban Ki-moon. The former UN Secretary-General fondly recalled signing one of the first diplomatic treaties between his country, South Korea, and Bangladesh, a newly independent nation then. At the time, he was working as a junior diplomat officer of South Korea. Vincent Chang thanked Ban Ki-moon for inviting him despite his tight schedule. Chang invited Ban Ki-moon to visit BRAC University to encourage students to participate further in the global arena.

Ban Ki-moon was in Dhaka to attend the Global Commission on Adaptation meeting, which was inaugurated by Prime Minister Sheikh Hasina, and attended by dignitaries from around the world. This was the former secretary general’s first visit to Bangladesh after leaving the UN.