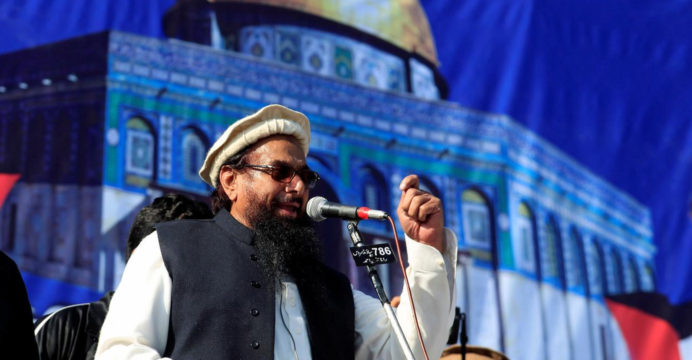 Pakistani authorities Wednesday detained the alleged mastermind of the 2008 Mumbai attacks, a security official said, as the country faces increased pressure to crack down on militants operating on its soil.

Firebrand cleric Hafiz Saeed — declared a global terrorist by the US and UN, and who has a $10 million US bounty on his head — was taken into custody following a raid by counter-terrorism forces in the eastern city of Gujranwala.

“Hafiz Saeed was going to Gujranwala to apply for bail in another case when he was arrested,” said a security official with knowledge of the arrest, who requested anonymity.

A spokesman for Saeed’s group, Jamaat-ud-Dawa (JuD), a wing of the militant organisation Lashkar-e-Taiba (LeT), confirmed the arrest to AFP, but gave no further details.

Saeed has spent years rotating in and out of varying forms of detention, sometimes under house arrest, sometimes briefly arrested then released again by authorities.

But for the most part he has been free to move at will around Pakistan, enraging India which has repeatedly called for his prosecution over his alleged role in the 2008 attack that killed more than 160 people.

Lashkar-e-Taiba is accused by India and Washington of masterminding the four-day assault on Mumbai. Saeed has denied involvement.

The move against Saeed comes as Pakistan is facing a potential blacklisting by the Financial Action Task Force (FATF) — an anti-money- laundering monitor based in Paris — for failing to do enough to combat terror financing.

FATF is set rule on its fate in the coming months after placing the country on a watchlist last year.

Washington and New Delhi have long urged Pakistan to take action against LeT, which was banned by Islamabad in 2002 but re-branded itself as JuD and FIF.

And earlier this year, Pakistan arrested more than 100 suspected militants and shuttered hundreds of religious schools.

The arrests came during an ongoing crackdown on extremists, following clashes with India after a Pakistan-based group killed dozens of Indian security forces in a suicide bombing in Kashmir.