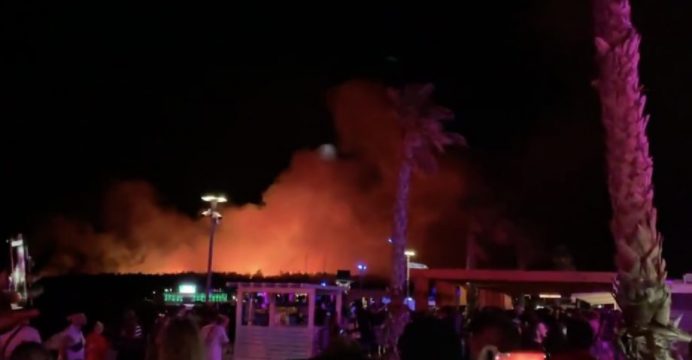 Music festival in Croatia evacuated because of forest fire

A music festival in Croatia has been evacuated because of a forest fire. Hundreds of people were forced to leave the Fresh Island music festival on Zrce Beach on Monday night, at the beginning of the three-day hip-hop event.

The fire forced the closure of the road to the closest town, Novalja, preventing many people from returning to their hotels, reports BBC.

“Thankfully police are escorting buses through to collect any remaining festival-goers,” the organizers said.

Rappers Stefflon Don and Yxng Bane were among the acts due to perform, with Tyga headlining.

It is unclear whether the rest of the festival will be canceled. In a statement, organizers said they were “doing everything we can to go ahead as planned to continue the parties”.

British rapper NOT3S, who was supposed to perform on Monday night, tweeted from backstage:

Footage posted by fans on social media showed flames billowing behind the festival site as they were evacuated.

In a statement on Twitter on Tuesday morning, festival organizers said: “The safety of fans is incredibly important to us and we worked with the emergency services to contain the fire over the following hours, transporting festival-goers off-site when possible and safe.”

They added that emergency services are still trying to contain the fire, “so we can’t say just yet how this will affect today’s beach performances”.