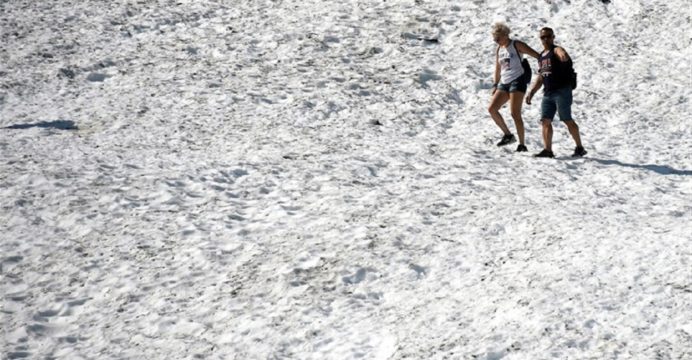 Alaska is sweltering under a heatwave

The US state of Alaska, part of which lies inside the Arctic Circle, is sweltering under a heatwave, with record temperatures recorded in several areas, including its largest city.

Experts say the unusual weather has been caused by a “heat dome” over the southern part of the state. The high-pressure system is expected to move north next week.

Anchorage’s record temperature of 90F was recorded at its airport at 17:00 on Thursday (01:00 Friday GMT), according to the National Weather Service. The previous all-time record for the city was in 1969. Other areas in Alaska also reached similar temperatures amid the heatwave, and several recorded daily and all-time records. 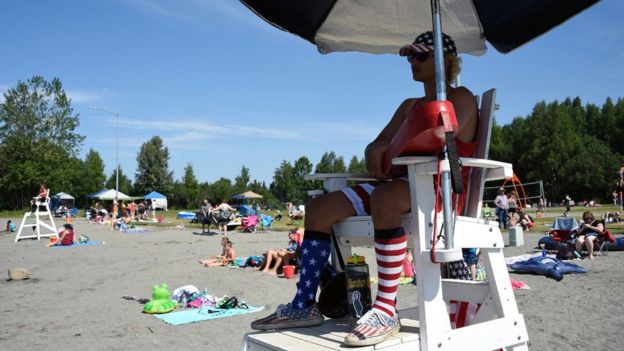 A lifeguard watches as people sunbathe at Jewel Lake, Anchorage

The state-wide record was set in Fort Yukon in 1915 when the temperature reached 100F. With the latest round of high temperatures set to continue in the state over the coming days, the National Weather Service urged people to stay hydrated, seek out shade and wear lightweight clothing.

Shawn King, a native of Anchorage, said he had never seen a stretch of similar hot weather. His young daughter Tessa had insisted on going barefoot when he offered to go fishing. “It’s too hot for shoes,” she said.

The dramatic warming Alaska has experienced in recent years is linked partly to a decline in sea ice and Arctic Ocean warming. This has wreaked havoc on local communities, wildlife and the state’s economy. Climate change played a role in the deaths of thousands of puffins in Alaska, scientists said in May.

They said they believed the birds had starved to death when the fish they eat migrated north with rising sea temperatures.