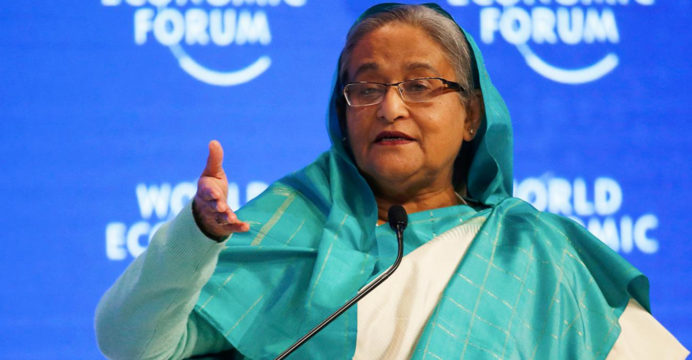 Prime Minister Sheikh Hasina today placed a five-point proposal to address the key concerns of smaller communities and weaker economies for their collective takeoff endeavours, which she felt crucial for a sustainable global economy, reports BSS.

“We sometimes look just in terms of the capacity of a few large economies or their needs,” she told the World Economic Forum (WEF) Annual Meeting at this Chinese city while placing the proposals.

But, the premier said, “we must address the key concerns of smaller communities or relatively weaker economies for our collective journey and sustainable world”.

Sheikh Hasina joined the session as a panel discussant on “Cooperation in the Pacific Rim” at Dalian International Conference Centre this afternoon.

“Over a five-decade of my journey in politics tells me that any initiative in Indo-Pacific should include the following . . .,” she said pacing the proposals, the first of which suggested creation of an environment of peace-harmony-stability of all countries.

The Bangladesh premier in her second of the proposals urged all to “focus on entire aspects of sustainable development” and in the third one suggested engagement of countries based on mutual trust and mutual respect for mutual benefit.

The fourth proposal stressed focus on wealth creation for all as “development must be inclusive”.

“Create fair competition not rivalry,” the premier said in her fifth proposal.

Sheikh Hasina said when she first assumed office as the premier in 1996 Bangladesh resolved a most challenging issue of sharing Ganges river water with India.

“We amicably delimited our maritime boundary with Myanmar and India. And now, Bangladesh and India are joining hands to uniquely develop our trans-boundary river navigation,” she said.

The prime minister said she always believes that despite differences in size and capacity compared to India, Bangladesh can only secure its peace and security through sustainable development and connectivity.

“We are for a rule based system. Yes, geo-politics will always be a part of life. But we have to carefully appreciate and balance issues (as) we cannot trade off long-term interests for short-term gains,” she said.

Sheikh Hasina pointed out that a cooperative yet competitive environment among all countries could be the “insurance of their shared prosperity”.

The premier said it was a widely recognized fact that the Indo-Pacific region is the most dynamic zone in the world while simultaneously “Bay of Bengal, home for 1.5 billion people, is a rich and growing region”.

“People living around our Bay of Bengal have so much potential to develop and grow. There is a tendency to look at Indo-Pacific in respect of trade or security issues,” she said.

As a fastest growing economy, she said, Bangladesh needs each of our friends for diverse purposes – not certainly at the expenses of another.

Sheikh Hasina described Bangladesh-India ties and engagements as “organic” saying it was “beyond a few billions of dollars of trade”.

“It is just organic. We have shaded blood together for our (Bangladesh’s) independence,” she said.