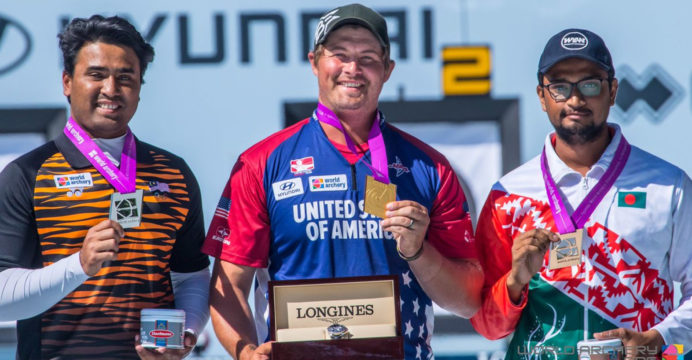 The archery team will return home today (Tuesday) morning from the Netherlands after participating in the World Archery Championship and the team is expected to land at Hazrat Shahjalal International Airport at 8.40 am.

Bangladesh’s best archer Ruman Shana, after earning the right to participate in Tokyo Olympics directly, ended his Hyundai World Archery Championships campaign on a high when he beat Mauro Nespoli of Italy.

Ruman in his bronze medal match produces an astonishing performance to take a 4-0 set points lead after winning the first two sets by 28-27 and 29-27 points. Nepsoli tried to stage a comeback as he tied the third set by 29-29 points. With Ruman needing only one set point in remaining two sets, the lad from Khulna once again scored 29 against Mauro’s 27 to win the match by 7-1 set points.

Ruman, who had previously captured two gold medals on foreign soil in the First Asian Archery Grand Prix in 2014 and International Archery tournament in Kyrgyzstan in 2017. He however eclipsed those performances with a bronze medal win yesterday as he had to compete against 200 archers from 92 nations including top archery nations like South Korea, Netherlands, USA, China, Chinese Taipei and India.

Ruman participated in two finals this year in ISSF Islamic Solidarity Archery Championships in Dhaka and Asia Cup (Stage-1) but he had to remain happy with silver medals.