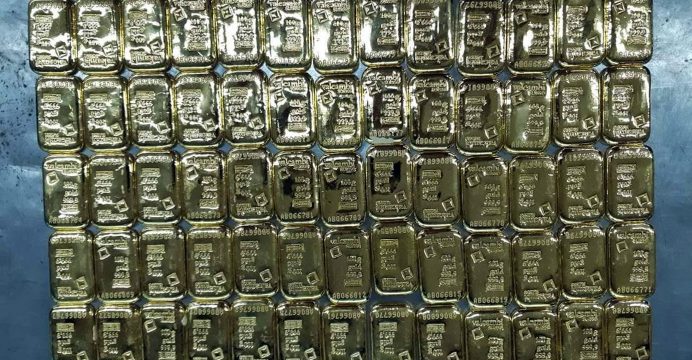 One held with 65 gold bars at Shahjalal int. Airport

One person has been arrested with 65 gold bars weighing about 6.5 kgs worth Taka 3.25 crore at Hazrat Shahjalal (R) International Airport here last night.

Deputy Commissioner of Dhaka Custom House Othello Chowdhury confirmed BSS about the seizure saying “The gold bars weighing 100gm of each were found after searching the body of one Rajib Dewan, 35, an inhabitant of Munshiganj.”

“Rajib landed Dhaka by a flight of the Singapore Airlines (SQ-446) at about 11 pm last night. A team of customs followed him from the boarding bridge, based on the secret information received earlier”, he added.

He said that Rajib initially denied carrying anything illegal when asked by customs officials while crossing the green channel and refused to let his body get searched.

The team immediately searched his body after the archway machine indicated metal like elements in his body and brought out the gold bars.

The recovered gold bars are now under the custody of the customs department.

A case was filed with airport police station in this connection under the Customs Act, 1969 and the Special Powers Act, 1974.