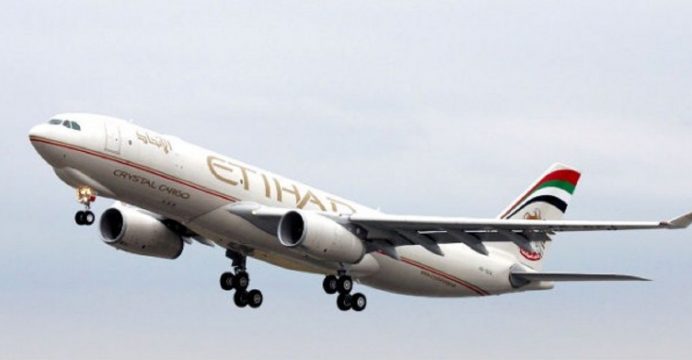 Middle Eastern carrier Etihad Airways has submitted a bid for a stake in India’s Jet Airways, the unit of State Bank of India (SBI) overseeing the sale of the stricken airline said on Friday.

SBI had invited binding bids for a stake in the airline, which is saddled with roughly $1.2 billion in bank debt. Binding offers were due by 1800 IST (1230 GMT) on Friday, reports Reuters.

Etihad, which already holds a minority stake in Jet, is interested in re-investing in the airline, subject to certain conditions, a spokesman for the Middle Eastern carrier said earlier on Friday.

Jet Airways aircraft stand on the tarmac at the domestic airport terminal in Mumbai, India

However, he added that Etihad “cannot be expected to be the sole investor” and “additional suitable investors would need to provide the majority of Jet Airways’ required recapitalization.”

Etihad gave no indication whether it was working with any other investors that might take a majority stake in Jet.

Once India’s largest private airline, Jet was crippled by mounting losses as it tried to compete with low-cost rivals IndiGo and SpiceJet Ltd.

Jet, which also owes vast sums to its lessors, pilots, fuel suppliers and other parties, stopped all flights from April 17 after its lenders, led by SBI, refused to extend more funds to keep the carrier flying.

Etihad was among four investors that submitted initial bids for the airline last month. The others were private equity firms TPG Capital and Indigo Partners and Indian wealth fund National Investment and Infrastructure Fund (NIIF).

SBI has also received two unsolicited, non-binding bids for Jet, the bank’s Chairman Rajnish Kumar told reporters, after a news conference on Friday, adding it had no plans at this time to drag the airline into a bankruptcy process

Jet for several months tried to convince investors, including Etihad, to pump in money and save the airline. But several potential investors had at least one condition – Jet’s founder and former chairman Naresh Goyal must cede control.

When Jet failed to garner interest, the banks, led by SBI, moved in with a rescue plan which was first announced in February and put into action in March after Goyal stepped down.

“A few unsolicited offers have also been received which the lenders may deliberate upon subsequently,” SBI Capital Markets said in a statement without giving further details.

Analysts are skeptical the sale process will succeed.

“The process of bidding and winning isn’t so easy,” said HDFC Securities analyst Deepak Jasani. “Day by day, losses and loans are rising at Jet, the more the process is delayed the more the situation becomes irreparable,” he said.

While the bid process was on, Jet was forced to vacate its offices at many airports across the country and employee access was revoked. Lessors also forced Jet to ground dozens of planes over non-payment of dues and it is left with just 13 aircraft, a senior SBI source told Reuters.

At its peak, 26-year-old Jet operated over 120 planes and well over 600 daily flights, flying Bollywood film-stars, politicians and business tycoons across India and the world.

If a deal fails to materialize, the airline could be dragged into bankruptcy by creditors, putting thousands of jobs at risk.