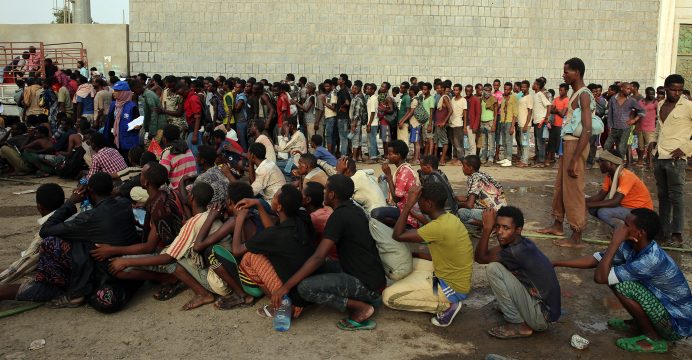 Authorities have rounded up and arbitrarily detained over 2,000 irregular migrants, predominantly Ethiopian nationals, in Aden, Yemen, since Sunday, creating an acute humanitarian situation, to which aid organizations are rapidly responding.

IOM is deeply concerned about the conditions in which the migrants are being held and is engaging with the authorities to ensure access to the detained migrants.

“The rights of the people being detained should be respected, and alternatives must be considered,” said IOM’s Director of Operations and Emergencies Mohammed Abdiker.

“We urge the local authorities to work with the humanitarian community to find safer alternatives to detention and to ensure a full spectrum of protection services are available for those detained, particularly the hundreds of children and approximately 60 women, who have been rounded up.”

The detainees, including at least 400 children, were held at Al Mansoura Football Stadium in Aden city. Up to 1,000 people are also being detained at a military camp in neighbouring Lahj governorate, roughly a 35-minute drive from the city.

On Thursday night, local youths opened the gates of Al Mansoura stadium, allowing the migrants to escape. The authorities began rounding up the escaped migrants and are now detaining an unknown number at a second football stadium in the city’s Sheik Usman area. IOM is seeking further information on the new location in order to respond to the needs of the detained migrants.

Neither open-air stadium is designed to accommodate large numbers people. Among other concerns, holding thousands there will inevitably create a substantial sanitation problem, risking the spread of disease amongst detainees.

The government has indicated that the migrants detained in Aden city will be moved to the military camp in the coming days. The proposed sites are a few empty, damaged buildings unfit for human habitation. Clean water and safe sanitation are not available for the thousands that may be detained.

Humanitarian actors are deeply concerned that the migrants will be moved to military camp before the site can be prepared to address the migrants’ most basic needs.

While IOM and humanitarian partners are providing essential assistance in response to this situation, the provision of assistance or protection to vulnerable people should not be dictated without consideration for humanitarian principles.