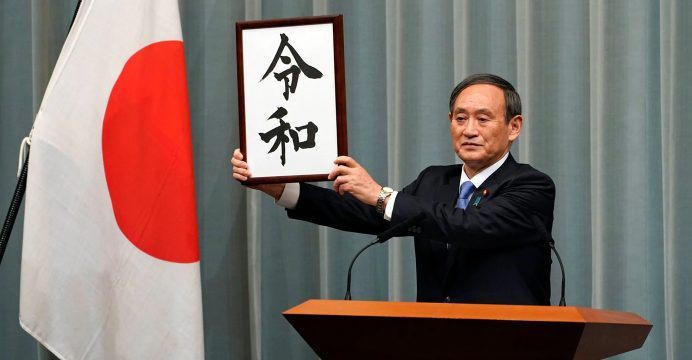 “Reiwa”: Japan Monday revealed the name of the era that will define the new emperor’s reign when he ascends the Chrysanthemum Throne next month following the first abdication in around 200 years.

The new imperial name consists of two characters: “Rei”, which can mean “order” but also “auspicious” and “Wa”, usually translated as “peace” or “harmony.”

After weeks of fevered speculation and top-secret discussions, the two “kanji” characters were unveiled to reveal a name that will last as long as new emperor Naruhito’s rule.

Prime Minister Shinzo Abe said the term “Reiwa” came from the “Manyoshu”, an anthology of Japanese poems dating back 1,200 years that “symbolises our nation’s profound public culture and long tradition”.

“Just like amazing plum flowers in full bloom that signal the arrival of spring after bitter cold, each and every Japanese person can hope for the future and make their own flowers blossom,” added the prime minister.

“It is the first time it comes from a Japanese text” rather than Chinese, noted Abe, often considered a nationalist.

Crowds gathered around Japan to watch live broadcasts of the announcement, many cheering as the chief cabinet secretary held up a board with the name inked in stylised black calligraphy.

“It has a nice sound and you get a good feeling when you read it. It’s a very good choice I think,” said 24-year-old Shun Fujimoto as he joined a chaotic scrum for a special edition of the papers at Tokyo’s busy Shimbashi station.

Eight-year-old Manato Nagayama also managed to get his hands on a copy of the extra edition but admitted: “I cannot yet write those two kanji.”

His father told AFP it was a “historic” moment. “That’s why I brought my son here so he could get a special edition. It’s an experience that only comes along very rarely. He is only eight and is already seeing two eras.”

The 85-year-old Emperor Akihito will step down on April 30 in favour of Crown Prince Naruhito, who will take the throne the next day.