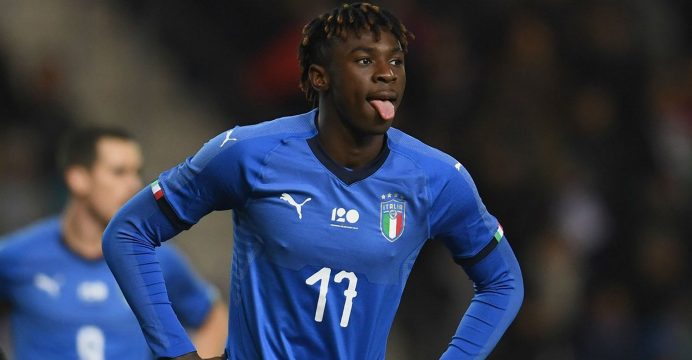 Teenage star Moise Kean said Saturday that he had learned from Juventus teammate Cristiano Ronaldo after scoring his first goal for Italy in what he hopes will be a record-breaking career.

The 19-year-old forward was the first player born in the 21st century to score for the senior team, with the second goal on 74 minutes in a 2-0 Euro 2020 qualifying Group J win over Finland in Udine.

“I learn from Cristiano Ronaldo, in training, I steal his secrets,” said Keane, who was born in Vercelli, a town between Milan and Turin, to Ivorian parents.

“I always try to be ready and train regularly so that I’m prepared when the time comes.

“This is a beautiful evening, but I know that I still have so many records to beat and I intend to beat them.

“When I got the call, I was fired up, excited, eager to show what I could do. Ciro (Immobile) gave me a great assist and it’s thanks to him and the whole team that I was able to score.”

The first player born this century to start in Serie A, the first to score in the Italian top flight, and the first to make his debut with the Under 21 team, Kean was also the first to play with the senior national team in a friendly match and now a competitive game on Saturday.

Kean, who was born in February 2000, had previously been chosen by Mancini in a friendly against the United States last November, coming on as a second- half substitute.

His goal against Finland made him the second youngest Italian to score for the national side after former Juventus player Bruno Nicole in 1958 against France, aged 18 years and 258 days.