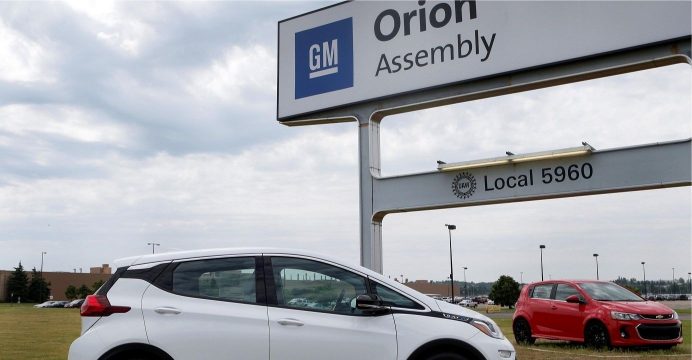 General Motors Co will announce on Friday plans to invest $300 million in a suburban Detroit plant that builds electric and self-driving vehicles for Chevrolet and the automaker’s self-driving Cruise unit, two people familiar with the plans said on Thursday.

The largest U.S. automaker is expected to announce it plans to build a new electric compact vehicle for Chevy, said the people, who asked not to be identified, reports Reuters.

The GM logo is seen at the General Motors plant in Sao Jose dos Campos, Brazil

Company executives are expected to make the case that the new EV – originally considered for one of GM’s Chinese plants – is being built in the United States because of the new trade deal that is still awaiting approval by the U.S. Congress.

GM has come under harsh attacks from President Donald Trump over its decision to end production at its Lordstown, Ohio, assembly plant.

On Thursday, the company said company executives would be joined at the Orion plant by United Auto Workers union Vice President Terry Dittes and government officials to announce “a major new investment focused on the development of GM future technologies.” GM Chief Executive Mary Barra is expected to make the formal announcement, which could add hundreds of jobs.

The new Chevy vehicle is based on the same compact architecture as the Chevrolet Bolt EV and the Cruise AV that are assembled in Orion.

The Orion Township plant is slated to begin building a new generation of electric and self-driving vehicles, using GM’s dedicated BEV3 architecture, but not until 2023, a third source said.

GM said a year ago it would invest $100 million to upgrade the Orion Township plant ahead of commercial production of the Cruise AV in late 2019.

Rival Ford Motor Co this week said it planned to expand its Flat Rock plant outside Detroit to add production of electric vehicles. Ford’s first self-driving vehicles will be assembled nearby at an as-yet-undisclosed location.