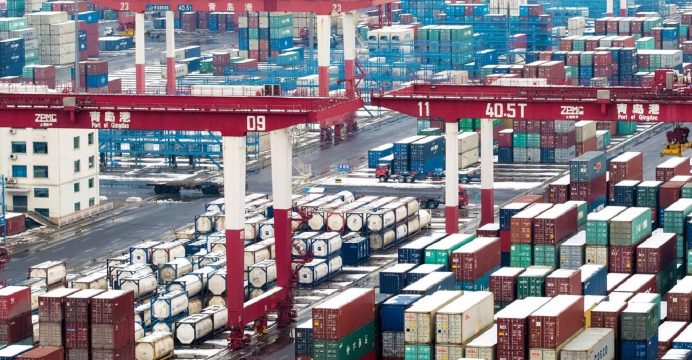 Chinese exports saw the steepest fall in three years in February, according to the latest trade figures.

Exports from China plunged 20.7% from a year earlier, as its trade war with the US took a toll, while imports fell 5.2%, reports BBC.

The figures point to signs of strain in the world’s second-largest economy and sent Asia stock markets lower.

Economists caution the data for the first two months of the year can be affected by the Lunar New Year holiday.

The fall in exports was far bigger than the 4.8% drop forecast in a Reuters poll of economists.

Imports also saw a sharper than expected fall of 5.2% year-on-year, the data showed.

“Tariffs are weighing on shipments to the US,” he wrote in a research note.

The US and China have placed tariffs on billions of dollars worth of one another’s goods since July, casting a shadow over the global economy.

Even though officials have sounded more positive about negotiations with the US recently, failure to achieve a deal would see tariffs on $200bn (£152bn) of Chinese goods rise almost immediately and could see the US impose fresh tariffs.

The data comes as Beijing this week unveiled $298bn worth of tax cuts to boost slowing growth.