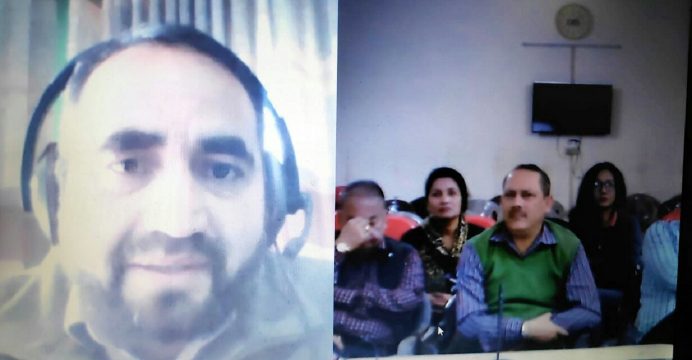 India and Afghanistan have maintained historically close ties fruitful for both nations. But political disturbances in Pakistan, located in between, poses difficulties for the Indo-Afghan bilateral relationship, observed senior Afghan radio journalist Abdul Mujeeb Khalvatgar while interacting with scribes on Sunday (3 March). He was participating in Guwahati Press Club’s ‘Meet the Press’ programme through video conferencing from Kabul.

However, these difficulties are short lived and both the friendly nations soon revert to business as usual. Regarding the present Indo-Pak standoff and the volatile situation in Kashmir, Khalvatgar asserted that the Indian government has legitimate rights to defend their territory and people. This is why New Delhi has drawn support from various countries, said the young scribe academically qualified in international relations.

Terming Afghanistan itself as a victim of terror, Khalvatgar urged all progressive forces worldwide to unite against terrorism that has emerged as a curse to the human race. Persistent conflicts fuelled by terrorism can ruin a nation, and Khalvatgar’s native country represents a classic example of this malady.

Speaking about the woeful condition of education and health sectors in Afghanistan, Khalvatgar said that many young Afghans now prefer to go to India for pursuing higher and professional education. Moreover many patients from Afghanistan, primarily suffering from hypertension, blood sugar, liver ailment various cancers opt for treatment at Indian hospitals. Indian film actors and Bollywood fare, as well as Hindi teleserials, continue to be popular among Afghans, Khalvatgar informed, adding that large sections of rural women remain glued to their TV sets running dubbed versions of Indian entertainment serials in local languages.

Fluent in Persian, Pashto and English languages, the author-journalist also revealed that many Afghan residents perceive India as a fairytale land where women usually pursue higher education to hold powerful positions in government and the corporate world.

Khalvatgar also appreciated the latest initiative to open a trade route between Afghanistan and India through Chabahar port of friendly nation Iran (bypassing Pakistan) that re-establishes the importance of Kabul as an international business center in the present era.

Nevertheless, he disclosed that the turmoil in Pakistan has severely affected the ongoing peace process between and the US administration. Radical Islamists are not interested in talking to the Afghan government in Kabul, whereas India has always championed negotiations, he said.

Speaking of New Delhi’s developmental initiatives in Afghanistan which have generated huge goodwill there, Khalvatgar pointed out that Afghanistan is the second-largest recipient of aid from India after Bhutan.

Having studied professional journalism in Europe, USA, Turkey, Sri Lanka, and India, Khalvatgar has also authored ‘Islam and Globalization’, ‘Provincial Councils and National Cooperation’ and ‘Ethics on Social Media’. He has been an active member of media law working groups, journalists’ ethical codes and access to information law in Afghanistan.

Despite numerous threats to media persons, Khalvatgar claimed, Afghanistan still supports a good deal of journalism in comparison to neighboring countries. Media may not have a direct strategy for peace and conflict resolution, but the Afghan media fraternity significantly contributes to various peacebuilding efforts in the country, he affirmed.

However, mainstream journalism across the globe has been facing major challenges from social/alternate media. People now look for internet-fed outlets for prompt news coverage while they also prefer newspapers and news channels for in-depth and analytical inputs. Even amidst fake news hogging headlines, social media continues to be a great influence on public opinion, said Khalvatgar as he signed off.