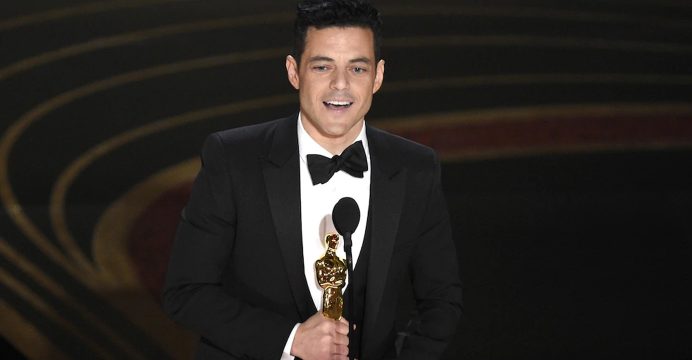 Rami Malek, who played Freddie Mercury, won his first Oscar as best actor
for his portrayal of late Queen frontman Freddie Mercury in “Bohemian Rhapsody.” Malek is just the second actor of Arab descent nominated for an Oscar, after “Lawrence of Arabia” star Omar Sharif. Malek is the first to win.

Malek, 37, had emerged as a favorite for the Oscar in recent weeks after winning Golden Globe, Screen Actors Guild British BAFTA awards.

A Los Angeles native of Egyptian descent, Malek took on the role of Mercury, born to etnhic Parsi parents from India who moved their family to England when he was in his late teens.

He took a moment to thank Queen and acknowledged the extraordinary story of Mercury’s life.

“The fact that I’m celebrating him and this story with you tonight is proof that we’re longing for stories like this,” Malek said.

“I am the son of immigrants from Egypt, a first-generation American. And part of my story is being written right now. And I could not be more grateful to each and every one of you, and everyone who believed in me for this moment. It’s something I will treasure for the rest of my life.” He added.