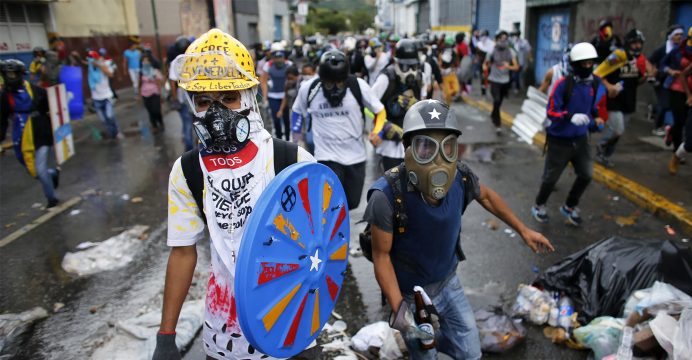 The deaths, mostly from gunshot wounds, were recorded in the capital and across the country, along with reports of looting in Brazilian border state Bolivar, the Venezuelan Observatory of Social Conflict told AFP.

Unrest first kicked off on Monday when 27 soldiers rose up against Maduro at a command post in Caracas, calling upon people to “take to the streets” in a video circulated on social media.

But the most fierce began Tuesday night in Caracas and Bolivar — continuing Wednesday throughout Venezuela on a day of huge opposition-backed demonstrations against Maduro.

On Wednesday, anti-riot police confronted protesters in east Caracas following the march called for by opposition leader Juan Guaido, who declared himself Venezuela’s interim president as part of his aim to remove Maduro.

Chaos erupted when dozens of young people, some hooded, blocked a key route through the wealthy Altamira neighborhood — only for military personnel to fire tear gasses and rubber bullets, which were in turn met with stones from protesters.

Apart from the capital Caracas, deaths were reported in Tachira, Barinas, Portuguesa, Amazonas and Bolivar states.

Wednesday’s demonstration, meanwhile, marked the first significant clash between the government and the opposition in the streets after violent protests left 125 people dead between April and July 2017.

Juan Guaido — the opposition-led legislature head who declared himself “acting president” — called for the protests two weeks ago.

His aim is to remove Maduro, set up a transitional government and hold elections.

He accuses Maduro of being a usurper following his disputed re-election in a poll dismissed as a fraud by the European Union, the US and OAS.