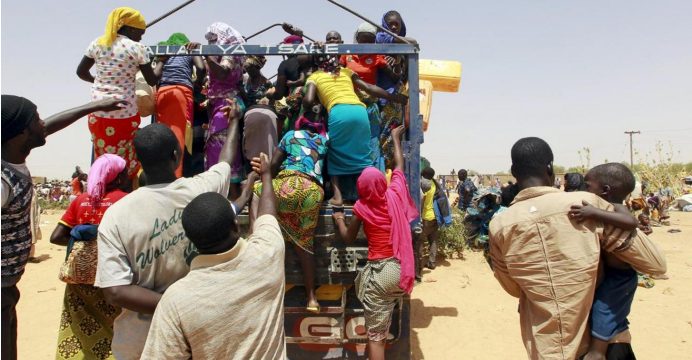 Thousands of Nigerians have fled across Lake Chad since Boko Haram launched attacks in and around the fishing town of Baga last month, the United Nations refugee agency said on Tuesday.

“An estimated 6,000 refugees have fled Nigeria’s restive Borno state since December 26, when clashes erupted between Nigerian forces and non-state armed groups in Baga town, near the Chadian border,” the UNHCR said in a statement.

“According to testimonies gathered by our teams, refugees are fleeing in fear of their lives after threats of retaliation and intimidation following militant attacks.”

The attacks have been blamed on the Islamic State West Africa Province faction of Boko Haram, which has repeatedly targeted the military in recent months.

Last week, the UN said there had since been a “massive displacement” of more than 30,000 people from Baga and the surrounding area to the Borno state capital, Maiduguri.

That had increased pressure on already overstretched aid agencies providing humanitarian assistance in the city.

Another 9,000 Nigerians sought refuge in Cameroon following a separate attack against troops in Rann, but the authorities there refused to take them, the UNHCR said last week.

The attacks come as Nigeria prepares to hold presidential and parliamentary elections in less than a month. Violence and so many displaced people is expected to make voting problematic.

The conflict between Boko Haram and the Nigerian army has claimed more than 27,000 lives since 2009 and more than 1.7 million people are still unable to return to their homes.

Edward Kallon, the UN humanitarian coordinator in Nigeria, has said the “increasingly frequent” attacks were “having a devastating impact on… civilians”.