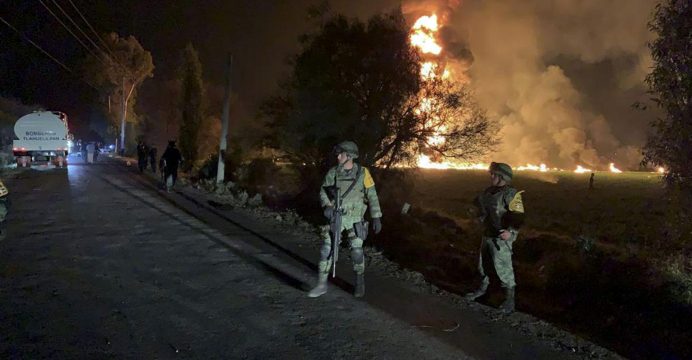 An explosion and fire in central Mexico killed at least 73 people after hundreds swarmed to the site of an illegal fuel-line tap to gather gasoline amid a government crackdown on fuel theft, officials said.

Hidalgo state governor Omar Fayad announced that the toll had increased to 73 after the discovery of five additional bodies.

The blast — which Fayad said injured 74 people — occurred near Tlahuelilpan, a town of 20,000 people about an hour’s drive north of Mexico City.

As soldiers guarded the devastated, still-smoking scene, forensic specialists in white suits worked among the blackened corpses — many frozen in the unnatural positions in which they had fallen — and grim-eyed civilians stepped cautiously along in a desperate search for missing relatives.

The pungent smell of fuel hung in the air. Fragments of burnt clothing were strewn through the charred brush.

When the forensic workers began attempting to load corpses into vans to be transported to funeral homes, some 30 villagers tried to stop them. They demanded their relatives’ bodies, saying funeral homes were too expensive. The bodies were ultimately taken to a morgue, authorities said.

On Friday, when authorities heard that fuel traffickers had punctured the pipeline, an army unit of about 25 soldiers arrived and attempted to block off the area, Defense Secretary Luis Crescencio Sandoval told reporters.

But the soldiers were unable to contain the estimated 700 civilians — including entire families — who swarmed in to collect the spilled gasoline in jerrycans and buckets, witnesses said. The armed soldiers had been moved away from the pipeline to avoid any risk of confrontation with the crowd when the blast occurred, some two hours after the pipeline was first breached, Sandoval said.

President Andres Manuel Lopez Obrador, a leftist who took office only
weeks ago, traveled to the scene early Saturday.