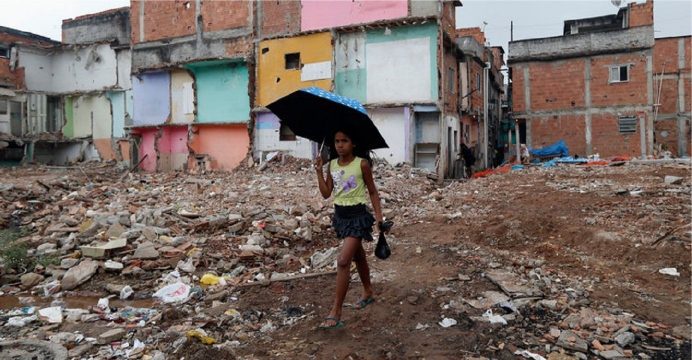 Extreme poverty in Latin America hit its highest level for nine years in 2017, according to a report by the UN’s Economic Commission for Latin America and the Caribbean (ECLAC) published on Tuesday.

“The proportion of people living in extreme poverty continues to increase,
continuing the trend begun in 2015,” ECLAC said while presenting its annual in Santiago.

“While the region made great progress during the previous decade and the
middle of the current one, since 2015 things have regressed, in particular
when it comes to extreme poverty,” added ECLAC executive secretary Alicia Barcena, during a press conference.

According to ECLAC, a United Nations body based in the Chilean capital,
poverty should decrease to 29.6 percent (182 million people) in 2018 while
extreme poverty will remain stable at 10.2 percent.

It noted that inequality has reduced in Latin America since the early
, pointing, in particular, to “important” social security measures taken
in recent years to contain an unfair distribution of wealth, reports BSS.

However, “Latin America and the Caribbean remains the most unequal region in the world with significant levels of poverty including many sectors, even if they have risen out of poverty and extreme poverty, that still vulnerable to economic cycles,” the report said.

ECLAC considers people in extreme poverty to be those who cannot afford
basic foodstuffs.