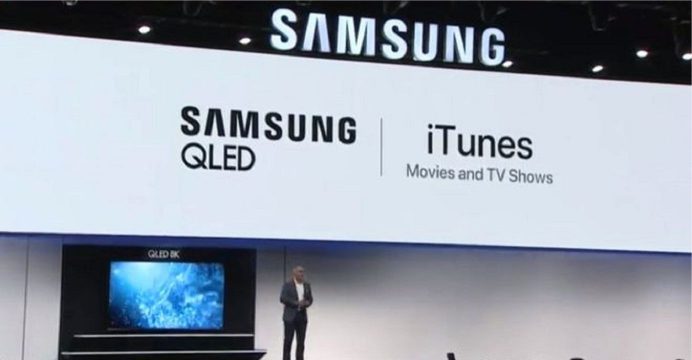 Samsung to include iTunes in it’s smart TVs

Samsung has said that from spring 2019 its new smart TVs will include iTunes – software made by rival tech firm Apple.

The move was “a true first”, senior Samsung executive Dave Das told the CES tech show in Las Vegas. The service will offer sales and rentals of films and TV shows but not music, reports BBC.

One analyst said the strategic move would benefit both companies. The deal comes ahead of Apple’s expected launch of a rival to Netflix.

Besides access to iTunes, the smart TVs will also feature AirPlay 2 support – allowing users to stream videos, photos and music from Apple devices.

Samsung’s previous generation of smart TVs will also gain the features via a firmware update.

LG had earlier announced its new TVs would get AirPlay, but not iTunes.

The BBC has contacted Apple to ask whether the iPhone-maker is paying Samsung to add iTunes.

It was a “fascinating” move, said Paolo Pescatore, an independent tech analyst.

“Samsung has made numerous failed moves in video services, while Apple is still seeking to crack the TV landscape,” he said.

“For Apple, this suggests a change in focus of making its services available on rival platforms rather than tightly integrating it into its own devices.”

Among Samsung’s other TV announcements at CES was the unveiling of a new range of QLED 8K TVs, including a 98in (249 cm) model.

These range from front-loading washing machines with an app that “provides a recommended cycle depending on the specific items, item colours and level of dirt”.

There was also a fridge that sends an alert to its owner’s phone if the door is left open.

By placing a finger on the machine’s upturned face – an animated screen – Bot Care obtains its user’s vital signs.

Samsung said it was also able to monitor sleep and track medicine intake.

Other robots in the range have been designed to help customers in shops, purify indoor air and assist elderly or less mobile people when walking.