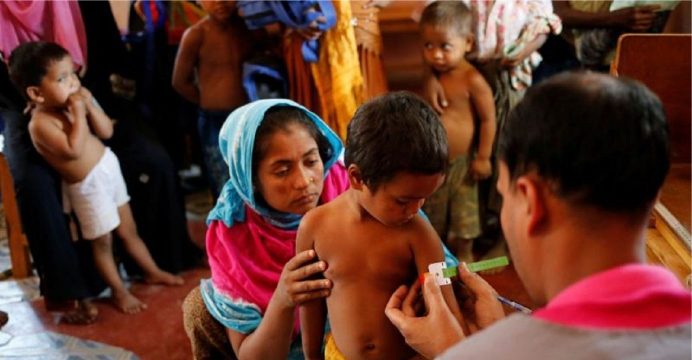 Dr. Tofayel Ahmed: a giant in child healthcare in Bangladesh

In recent years, a series of studies by the United Nations and the World Bank applauded Bangladesh’s efforts in curbing child mortality. In Asia, among the least developed and middle-income countries, words of praise were particularly reserved for Bangladesh.

According to the Unicef, the UN’s children fund, Bangladesh has done an “outstanding job” at decreasing child mortality rate by almost 80 percent since 1990. The country has also a higher than average annual rate of reduction at 5.5 percent, a figure that shows Bangladesh is doing a far better job than Pakistan.

This impressive gain has not been achieved in a single year or a decade. There are contributions from many people and organizations. Dr. Tofayel Ahmed, a founder of the Dhaka Shishu (Children) Hospital (DSH) is one of them. As a pediatrician and a leader in his field, he oversaw the construction of the country’s – and one of the world’s – largest specialized hospital for the children. But these days he is a forgotten man. All that remains is his mural at the hospital. A giant in public health in Bangladesh is hardly remembered, other than by his close friends, relatives colleagues.

But as his family quietly celebrates his 90th birthday on January 1, let’s recall his contribution Bangladesh’s impressive gain in healthcare. Dr. Tofayel, as he known to his friends, was the member secretary of the DSH Trust Fund and the founder member secretary of the Management Board of the 535-bed DSH. He was also the member of the construction committee of the DSH, which started functioning at its current premises at Sher-e-Bangla Nagar in 1977.

He was one of the youngest professors of pediatrics. But while many of his colleagues spent their whole life in private practices, Dr. Tofayel dedicated all his life community medicare. Former colleagues still remember him for his years of leadership and his tireless efforts to build one of the world’s best hospitals for children.

“All I can say about him is that he was a born leader who loved children. Ensuring quality healthcare for every child and mother in the country was his lifelong dream,” said his former colleague and one of the country’s top pediatrician Sirajul Islam.

Mr, Islam still fondly remembers those years in the 1970s when he helped set up a tent hospital for children at Dhanmondi, which later grew into the DSH.

“The war of liberation has just finished. The country was still very poor. And there was hardly any good hospital for child and mother-care. It was during those years that Dr. Tofayel Ahmed realized the need for a quality community healthcare for children,” said Dr. Islam.

But the government alone could not fund the construction of such a big hospital. Dr. Tofayel and his colleagues including professor Sultan Ahmed Chowdhury, who was the first director of the DSH, came up with the novel idea to raise fund through lotteries. Holding to raise fund for noble causes is a western idea. It was never tried or tested in Bangladesh. But thanks to their tireless efforts, the lotteries proved to be a success and provided some seed money for the giant hospital.

“Those were a time. The government’s budget was very low. We have to depend mostly on foreign aid to construct any major project. Dr. Tofayel and other founders did not give up their hope,” Said Dr. Islam.

Mr. Islam also recalled Dr. Tofayel’s contribution for reaching the quality child and health care to the doorstep of the countrymen, especially to rural people.

“He was a pioneer in rural healthcare,” he said, adding Dr. Tofayel built Palli Shishu Foundation (Rural Children Foundation), which still provides quality healthcare to children in villages. “He also helped set up a top child healthcare institute at the BSH.”

Dr, Hanif, a famed child nephrologist who uncovered paracetamol scam that killed hundreds of children, lauded Dr. Tofayel’s “tireless efforts” to shape the BSH into a world-class hospital and institute. “He was a workaholic, who hardly took any rest even when he became sick during his late years,” remembers the eminent doctor.

“He was also a visionary who felt the need for a top public hospital for children. He wanted to turn the DSH into an institution that not only serves the rich and middle class but also the poorest children from the countryside. During those days, when public healthcare was still not adequate, he felt the need for training doctors who provide healthcare in the remote villages. He had deep love for the poor rural children,” he said.

Dr. Tofayel was born in Bikrampur in the then undivided Dhaka district to a well-known Muslim family in January 1929. He did his MBBS from the Dhaka Medical College Hospital. Later he went abroad to be trained as a pediatrician. He had private practices, but mostly he spent his career building institutions that now proudly serve millions of people every year. Apart from being the member secretary of DSH, he was a professor and the head of Department of Community. He was also a senior consultant at the BICH, an institute at the DSH. He died in Dhaka on March 12, 1997.