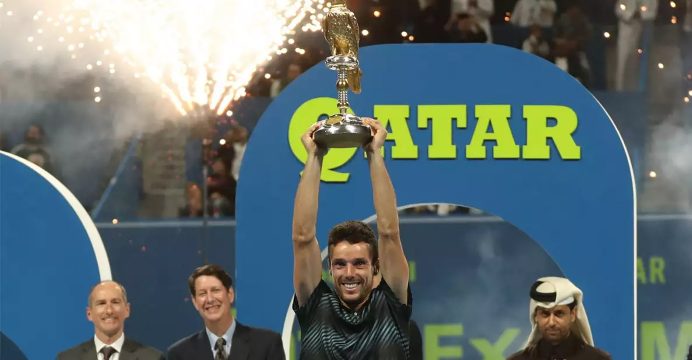 Roberto Bautista Agut followed up his shock victory over world number one Novak Djokovic by lifting the Qatar Open title on Saturday.

The Spaniard ground out a hard-fought victory in three sets against the Czech Republic’s Tomas Berdych, winning 6-4, 3-6, 6-3 in the final.

“It’s been a fantastic week for me,” he said immediately after his triumph.

“Today it was not easy to manage all the emotions I had on court.”

It was the 30-year-old’s ninth career title and his first in Doha.

Bautista Agut will rise one place in the world rankings to 23 on the back of the victory in Qatar, and said his aim was to go higher.

“Why can I not be close to the top 10?” he asked afterwards.

He added that his immediate aim was to “be fresh” and then win as many matches “as I can” in Melbourne at the Australian Open.

The victory came 24 hours after he beat Djokovic in the semi-final, also in three sets.

In total, Bautista Agut only lost two sets all week in his five matches.

The Spaniard made the decisive break of serve in the third game of the final set to take a lead he never lost.

Wildcard Berdych threatened to break back but squandered two points on Bautista Agut’s serve in the seventh game.

“Roberto was too good, so well done for the title today, but I am happy for the week,” said Berdych, whose 2018 season was blighted by a back injury.

The defeat was the second time Berdych has lost in the Qatar final, the first occasion was in 2015 to another Spaniard, David Ferrer.