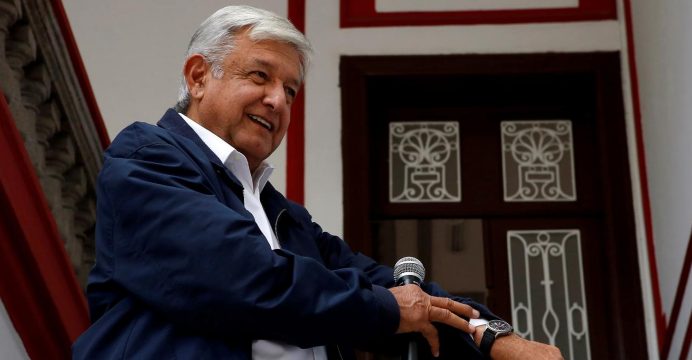 Mexican president owns no cars or real estate, but his wife does

Mexican President Andres Manuel Lopez Obrador said on Friday he owns no real estate, vehicles or personal property, echoing what experts say is a pattern among the country’s politicians of shifting assets to relatives.

Lopez Obrador, who took office in December, told a regular news conference his family’s cars and home are in his wife’s name.

The veteran leftist won a landslide victory in July after a campaign centered on rooting out corruption in Mexico, which experts say is among the worst in Latin America. Heg cuts an austere figure, ditching the presidential residence, flying coach and driving a white Volkswagen Jetta.

Transparency advocates welcome Lopez Obrador’s disclosure after battling to get members of his predecessor Enrique Pena Nieto’s administration to open up about their finances, said Alexandra Zapata of the Mexican Institution for Competitiveness (IMCO), a think-tank that promotes good governance and fighting corruption.

But his declaration raised as many questions about his wealth as it answered, she added.

Mexican politicians have long been accused of obscuring their wealth by registering assets under relatives’ names. Those who absorb the assets are sometimes referred to as “prestanombres,” or people who lend their names.

Lopez Obrador has slashed salaries for public officials, including his own, and stressed on Friday that others in his administration would be required to declare their assets, too.

The president said during the news conference that his principal asset had been a property in the southern state of Chiapas, which he inherited from his parents and is now registered under his children’s names.