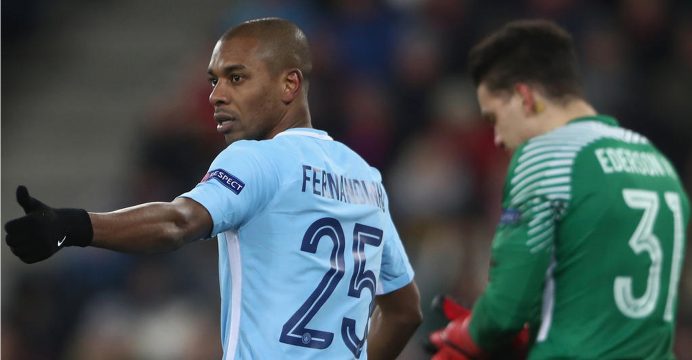 On the finest of margins, a title race can turn. Manchester City resurrected their of the Premier League by inflicting Liverpool’s first defeat of the season in an enthralling encounter decided by .

At one end Sadio Mane hit the post and John Stones cleared off the line with 1.12 centimetres to spare before the ball crossed the line to deny Liverpool a first-half lead.

Leroy Sane’s winner in City’s 2-1 victory also hit the woodwork of the same goal over an hour later, but this time the ball spun into the net.

“In the end, you can say post (and) in or post (and) out can make a massive difference — today we witnessed that,” said Liverpool manager Jurgen Klopp.

City now trail the league leaders by just four points after a run of three defeats in four games in December threatened to completely derail their bid to become the first side in a decade to retain the Premier League.

“It was a final for us, because losing today it was almost over,” said City boss Pep Guardiola.

A game that had everything as Roberto Firmino’s well-worked equaliser for the visitors cancelled out Sergio Aguero’s stunning strike to open the scoring, showed why this fixture has superseded other rivalries as the Premier League’s showcase since the arrival of Guardiola and Klopp.

Despite City’s romp to the title with a record 100 points last season, it was Liverpool who held the upper hand in head-to-head meetings, winning three out of four, including a Champions League quarter-final 5-1 on aggregate.

A thirst for revenge and desire not to surrender their title was obvious from the City players, on the bench and in the stands.

As the rivalry between these two sides has brewed over the past year, City are normally portrayed as the more cold and clinical — a winning machine built on money from Abu Dhabi.

But by full-time the Etihad had reached a fever pitch more reminiscent of Anfield as Guardiola admitted he had never experiencedan atmosphere like it for a City home game.