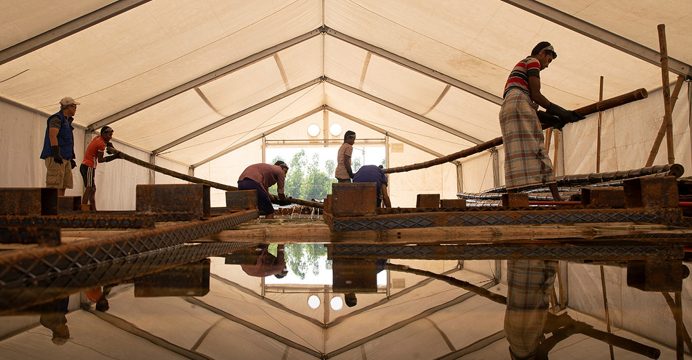 Work has begun on one of the largest bamboo treatment plants ever installed in an emergency response, as IOM experts tackle a tiny insect that is devastating structures in the world’s biggest refugee settlement.

An infestation of “boring beetles” means the bamboo in almost every shelter in the Rohingya refugee camps in Cox’s Bazar – home to around 240,000 families – needs to be replaced. With just over four months to go until the beginning of the next monsoon season, the race is on to provide families living in the worst-affected shelters with new, more-durable bamboo.

To help meet the challenge, IOM has launched a new treatment facility in the south of Cox’s Bazar, which will be scaled up over coming weeks until it has the capacity to treat around 40,000 pieces of bamboo per month – sufficient to upgrade between 6,000 – 7,000 shelters.

Almost a million Rohingya refugees are currently sheltering in Cox’s Bazar. They live in a rapidly constructed city of bamboo and tarpaulins built on the hills of a forested nature reserve in late 2017 after violence in Myanmar drove hundreds of thousands of people across the border into Bangladesh in just a few weeks.

During the emergency response in the weeks and months that followed, millions of pieces of bamboo were brought in from across the country to help build life-saving shelters and medical facilities. Bridges, steps and handrails were also built with bamboo to keep vital access ways open and to shore up vulnerable slopes.

But the scale and urgent need for supplies to upgrade shelters ahead of monsoon, meant organisations were forced to rely on young bamboo that is more susceptible to attack by insects.