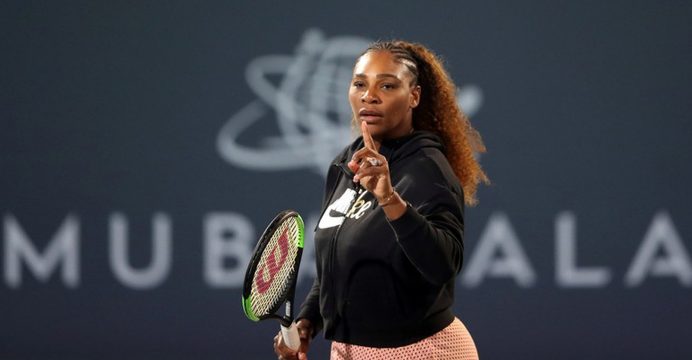 Serena Williams beat Maria Sakkari in straight sets at the Hopman Cup on Monday, winning her first non-exhibition match since losing the U.S. Open final in September after a tantrum.

The Hopman Cup, played in Perth, Australia, features one man and one woman from eight countries.

Williams, 37, had wraps on both ankles and needed help from trainers during the match, but said she was happy to be back on the court in competition.

“It was my first match back. I was making a lot of errors,” Williams said. “It was great to be back out on match day.”

Last week, Williams lost to her sister Venus in an exhibition match in Abu Dhabi.

Williams later teamed with American Frances Tiafoe in mixed doubles against the Greek pair of Sakkari and Stefanos Tsitsipas, but lost in three sets, 4-1, 1-4, 4-2.

On Tuesday, the United States will take on Switzerland, with Williams and Tiafoe meeting Roger Federer and partner Belinda Bencic in mixed doubles as part of the day’s slate.