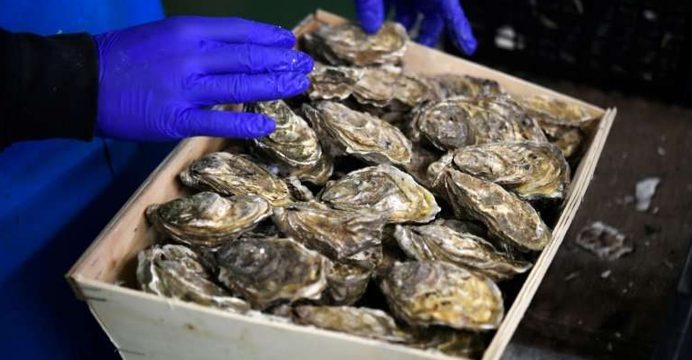 Gulping down oysters long been a New Year’s Eve ritual for the French, but as winters get warmer and summers get drier many growers there will soon be fewer of the prized mollusks to go around.

“Twenty years ago, we’d be shivering in the warehouse while preparing the holiday orders. Today it’s 15 degrees (60 Fahrenheit),” says Brittany oysterman Mathieu Le Moal, his sleeves rolled up in front of a long been dozens of bulging oyster sacks.

“We don’t have seasons anymore — but oysters need all four,” Le Moal adds. “They need the winter, it’s when they can rest, use less energy.”

Inside a wooden hanger redolent of salt and the sea, around a dozen of his workers are sorting, weighing and packing oysters into crates in the Brittany port of Cancale.

Le Moal and other farmers along this stretch of France’s Emerald Coast say the long drought which struck swathes of the country this summer took a heavy toll, leading to smaller harvests, and smaller shellfish.

Without summer rains that wash get warmer minerals into the oyster beds, “there’s no plankton, the main food for oysters, so they don’t grow,” explained fellow oysterman Bertrand , weaving his way between baskets and stacked crates.

“In the end, we have oysters but not enough of the big ones,” said , who like most growers sells more than half his yearly production in December.

But this winter has so far been unusually warm and, paradoxically, too rainy.

Rains may bring minerals that plankton growth — but they also mean the mollusks spend too much energy eating.

This year’s harvest likely to start the spring “fragile and vulnerable”, warned .