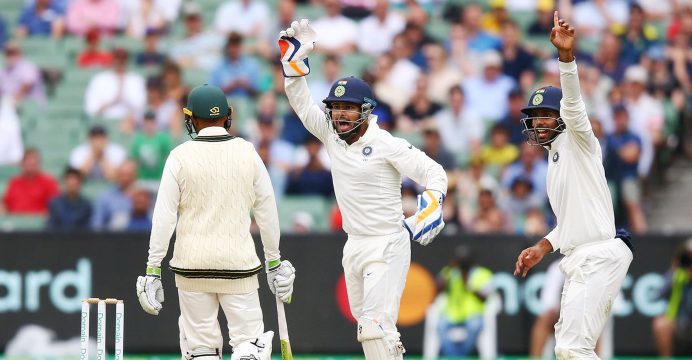 India zeroed in on a 2-1 series lead against Australia on Saturday, taking two quick wickets after declaring and setting the home team a massive 399 to win the third Test.

After early morning drizzle, India started an overcast fourth day in Melbourne with a 346-run lead and with five wickets in hand on a wearing pitch becoming increasingly difficult to bat on.

Skipper Virat Kohli declared at 106 for eight, with Australia chasing what would be a record fourth innings total at the Melbourne Cricket Ground.

The previous biggest successful run chase at the ground came in 1928, when England made 332 for seven to beat the hosts.

India have almost a full two days to get the job done as they seek a first ever series win Down Under, with just the Sydney Test next week to go.

The task for Australia was made harder when Aaron Finch once again flopped, throwing his role as a Test opener under ever more scrutiny.

He played a poor shot to pace spearhead Jasprit Bumrah — who snared six wickets in the first innings — and was caught by Kohli for three.

Fellow opener Marcus Harris followed him back to the pavilion for 13, getting an inside edge from spinner Ravindra Jadeja to Mayank Agarwal close in.

At lunch, Australia were 44 for two with Usman Khawaja not out 26 and Shaun Marsh on two.

Pat Cummins had sparked the game back to life late Friday by grabbing four wickets in a devastating spell after his team was skittled for just 151 in reply to India’s 443 for seven declared.

It included the key scalps of dangermen Cheteshwar Pujara and Virat Kohli for ducks.

Debutant opener Agarwal, who had witnessed the carnage from the other end, showed early aggression on Saturday, rushing down the pitch to smack spinner Nathan Lyon for two big sixes in the third over of the day.

But he was no match for Cummins who was again Australia’s saviour when a low delivery ricocheted off the bat onto the stumps and he was out for 42.

It was Cummins’ third five-wicket haul in his 17 Tests — and he achieved the feat in just nine overs for 14 runs.

Not satisfied, he then had Jadeja caught at short point by Khawaja for five to give him career-best figures of 6-27 off 11 overs.

When Rishabh Pant fell to Josh Hazlewood for 33, Kohli made the declaration.