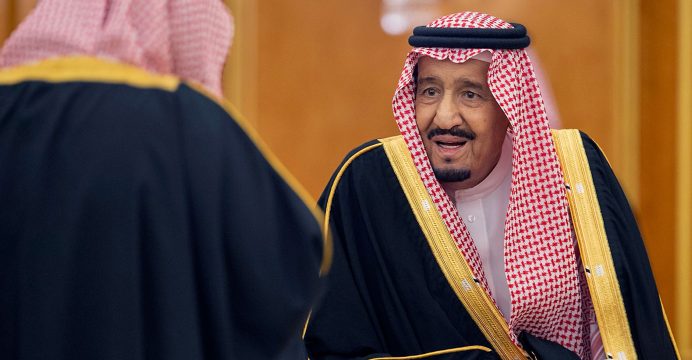 The surprise shake-up saw the appointment of new ministers of the powerful National Guard, information and education, as well as the head of a new space agency, but the energy and finance ministries were unaffected despite an economic downturn.

The revamp left untouched the authority of Crown Prince Mohammed bin
Salman, the de facto ruler facing intense international scrutiny over the October 2 murder of journalist Khashoggi, which tipped the kingdom into one of its worst crises.

Ibrahim al-Assaf, a former finance minister who was detained last year in an anti-corruption sweep, will replace Adel al-Jubeir as foreign minister, a royal decree said.

Jubeir, who sought to defend the tainted government internationally after Khashoggi’s murder, was effectively demoted to minister of state for foreign affairs, the decree added without explaining the change.

In other significant appointments, Prince Abdullah bin Bandar was named
chief of the powerful National Guard, and Musaed al-Aiban, a Harvard
graduate, was appointed the new national security adviser.

The reshuffle would help the crown prince further “consolidate power” as many of those promoted were his “key allies”, tweeted Ali Shihabi, head of the pro-Saudi think tank The Arabia Foundation.

In other changes, Turki al-Shabanah, an executive at broadcaster Rotana, was appointed as the new information minister, replacing Awwad al-Awwad — who was named as an advisor to the royal court.

Turki al-Sheikh, a close aide to the crown prince, was removed as the head of the kingdom’s sports commission and appointed entertainment authority chief, while Ahmed al-Khatib was named tourism authority chief.

The king also ordered the creation of a national space agency to be led by one of his other sons, Prince Sultan bin Salman, a former astronaut.

The energy, economy and finance ministries were left untouched even as the petro-state faces a sharp fall in crude prices that has generated renewed uncertainty over Prince Mohammed’s Vision 2030 reform programme for a post- oil era.

But the appointment as foreign minister of Assaf, who holds a seat on the boards of state oil giant Aramco and the vast Public Investment Fund,
indicates an emphasis on “economic diplomacy” as the kingdom seeks to
reassure foreign investors rattled by the Khashoggi crisis, analysts say.

Assaf was held in Riyadh’s Ritz-Carlton hotel last year along with
hundreds of elite princes and businessmen, in what the government called an anti-corruption crackdown.