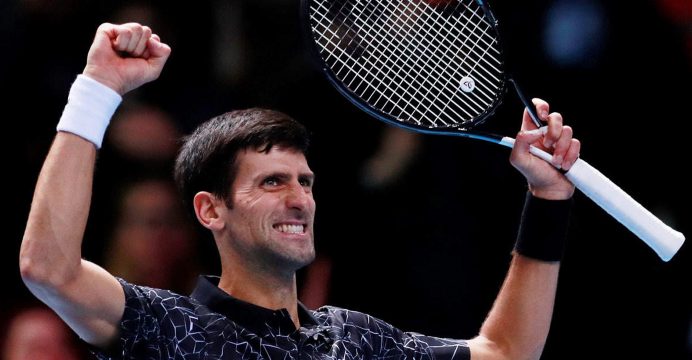 Djokovic back on top as old guard refuse to let go

Young German Alexander Zverev’s breakthrough title at the ATP Finals in London last month brought the future into focus but the year ended with men’s tennis in the grip of a block of 30 somethings led by a resurgent Novak Djokovic.

Serbian Djokovic, 31, needed elbow surgery in February to cure a problem that surfaced in 2017, but after some jarring defeats he returned to the kind of domination he achieved in 2015, winning Wimbledon and the U.S. Open.

Roger Federer continued to hold back the clock as only he can by winning the Australian Open, aged 36 and a few weeks later became the ATP’s oldest world number one.

Rafael Nadal, 32, had an injury-hit year but that did not stop the Spaniard winning an 11th French Open title.

By the time the long season wrapped up, Djokovic, Nadal and Federer were one, two and three in the ATP rankings with seven of the top 10 aged 30 or over.

The eagerly-awaited return of Serena Williams to the women’s game after giving birth to daughter Alexis Olympia last September failed to deliver the American a record-equalling 24th Grand Slam singles title, although she was tantalisingly close.

It is not the majestic tennis she played en route to the Wimbledon and U.S. Open finals that will be remembered, however, but her controversial Flushing Meadows showdown against Japan’s Naomi Osaka and the ensuing fall-out and allegations of sexism.

In one of the most infamous matches played in the New York cauldron, Williams raged after being given a code violation for ‘off-court coaching’ in the second set, refuses penalty for angrily smashing a racket and was docked a game for calling umpire Carlos Ramos a “liar”.

Osaka, who has since turned 21, somehow stayed calm in the bedlam to beat her childhood idol, but was reduced to tears as the crowd booed during the post-match presentations — angry at the perceived unfair treatment of the queen of women’s tennis.

Patience paid off for two of the WTA’s ultimate battlers.

A few months later Halep became the first Romanian to win a Grand Slam title for 40 years as she beat American Sloane Stephens at Roland Garros.