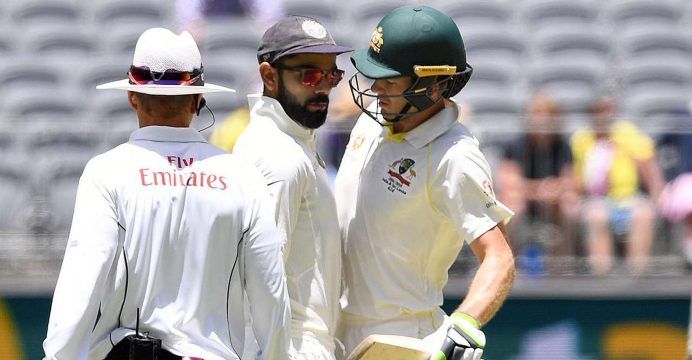 The pair had some testy exchanges in the second Test at Perth, which at one point needed the umpire to intervene.

And Kohli offered only a frosty handshake at the end of the game, which Australia won to level the series 1-1, refusing to meet Paine’s eye in a move blasted by some as disrespectful.

But Paine said he appreciated that Kohli never liked to lose.

“A lot was made of my battle with Virat in the second Test, and for the past few years when I haven’t been playing international cricket, he was one I loved watching,” he said in a column for Melbourne’s Herald Sun.

“Now to be out in the middle going head-to-head with him in a Test series is something I’m really relishing.”

Paine said he was not annoyed “in the slightest” by Kohli looking straight past him at the handshake.

“Virat is someone who is prepared to wear his heart on his sleeve and like all professional athletes, hates to lose,” he said.

“I like the way Virat plays. I don’t know him personally but I’ve always admired — not only his obvious skill as a player — but the passion and aggression he plays with. People like to see that and he gets fans through the gates.”

Kohli’s antics in Perth, where he also failed to acknowledge the crowd’s applause after he was controversially given out in the first innings for 123, brought a stunning rebuke from veteran Bollywood star Naseeruddin Shah.

He described him as “not only the world’s best batsman but also the world’s worst behaved player”, with the mass-circulation Hindustan Times saying it articulated what many Indian cricket fans had been thinking.

But coach Ravi Shastri hit back on Sunday, calling Kohli “an absolute gentleman”.

Paine said he liked to play in a similar way to the Indian superstar but was not as outward in his emotions.

“We all play at this level because we love the contest and his combative
style and the way he backs himself is how he gets up,” he added.

“My mantra as Australian captain is you have to be yourself. I know I lead and perform better when I stay calm under pressure.”

With the four-match series tied, the stakes are high for the third Test starting Wednesday, and Paine said he expected India to come out firing: “I think day one in particular is going to be really intense, ‘hard’ cricket.”