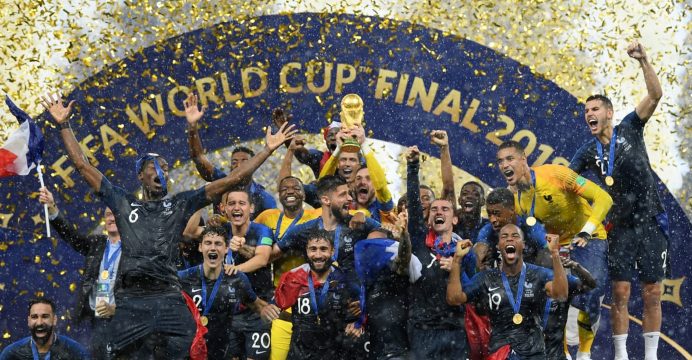 More than half the world watched record-breaking 2018 World Cup

FIFA has published the key findings of a comprehensive audit of consolidated final audience data for the 2018 FIFA World Cup Russia, which was broadcast live in every territory around the world from 14 June to 15 July this year.

A combined 3.572 billion viewers – more than half of the global population aged four and over – tuned in to world football’s ultimate competition, according to audience data for official broadcast coverage of the 2018 FIFA World Cup.

The global in-home TV audience watching at least one minute of coverage totalled 3.262 billion, while a further estimated 309.7 million people watched no coverage in home but caught the action on digital platforms, in public viewing areas or in bars and restaurants, boosting the total audience by 9.5 per cent.

The final between France and Croatia on 15 July attracted a combined global audience of 1.12 billion, comprising 884.37 million viewers tuning in to linear TV coverage and a further 231.82 million out-of-home and digital-only viewers.

Over the 64 matches, the average live audience was 191 million: each game was a global televisual event in its own right.