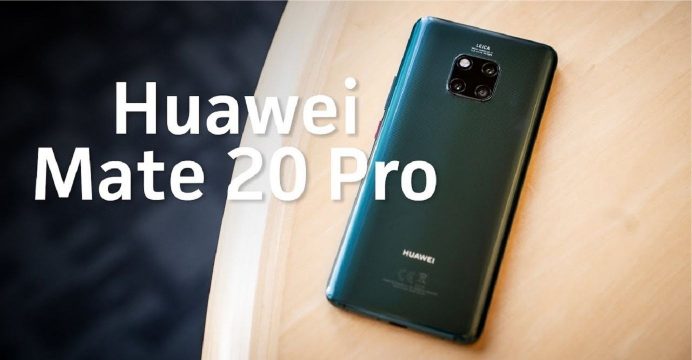 Gadget fans have a great time ahead as Huawei Mate 20 Pro, the flagship smartphone of Huawei’s state-of-the-art technology is available in the market of Bangladesh from Wednesday onwards. The pre-booking, which went on between November 18 and 25, met a storm of hype and the stock ran out two days prior to the expected deadline. Demands ran sky-high and not all customers could get their hands on the device, prompting the company to return with a greater stock. The year’s most-hyped smartphone is now available at selected brand shops of Huawei across the country. The handset sells at Tk 89,990.

Huawei Mate 20 series was unveiled through ornate ceremonies in London on October 16 and in Shanghai, China on October 26. The China-based global company then chose Bangladesh to launch this flagship smartphone, which is powered by Huawei’s own processor Kirin 980 chipset, manufactured with the advanced 7 nm processor. Huawei Mate 20 Pro phone runs on 4200mAh battery. The smartphone features Leica triple-lens camera – one 40 megapixel, one 8-megapixel telephoto, and another 20-megapixel ultra-wide angle lens camera.

Kelvin Yang, Country Director, Huawei Consumer Business Group (Bangladesh), said “Huawei Mate 20 Pro met a storm of hype in this market. This is more than what we expected. The stock ran out at the pre-booking phase. Now the phone has been made open for all. We hope that customers will now get the feel of using the premium smartphone.”

The phone has climbed up the ranking of AnTuTu benchmark and secured its place among its list of top 10 phones across the world. This flagship device with AI technology is equipped with the latest edition of Android 9 operating system. Clear pictures can be captured from a distance as close as 2.5 centimeters. The device will help not just in capturing photos but with information as well.

The phone is provided with Wireless Super Charger in addition to fast charging wire. You can also turn on the ‘reverse charging system’ of your phone to get it charged by simply placing it beside another Mate 20 Pro smartphone. Moreover, this smartphone offers app lock technology so that it can be unlocked by finger or face.