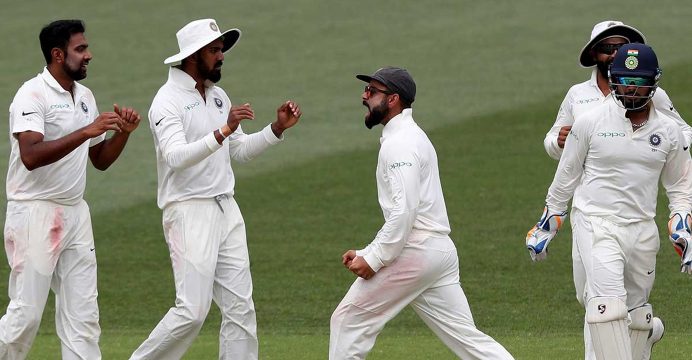 India won their first Test on Australian soil in a decade Monday, bowling out the home side in a finale to clinch the opening match of the series at Adelaide Oval with Rishabh Pant equalling a world-record along the way.

The hosts were set an improbable target of 323, which would have been a record run chase at the ground but gallantly battled to 291 before Josh Hazlewood became the last man to fall to Ravichandran Ashwin, who finished with 3-92. Shaun Marsh made 62 and Tim Paine 41.

In doing so, he beat the record 10 catches in a game by an Indian that was previously held by Wriddhiman Saha.

It was a huge breakthrough for Virat Kohli’s men, with Australia always proving a tough hunting ground.

The last Test they won in Australia was at the WACA Ground in Perth in
2008, and the last one in Adelaide was 2003, with just six victories now in more than 70 years — and never one in the first match of a series Down Under.

Another blot on Indian cricket history is that they have never won a series in Australia.

But with the home team missing the banned Steve Smith and David Warner, Kohli and his team sensed ahead of the tour that this could be their opportunity to make history.

They now take the momentum into the second Test in Perth starting Friday, with Melbourne and Sydney to follow.