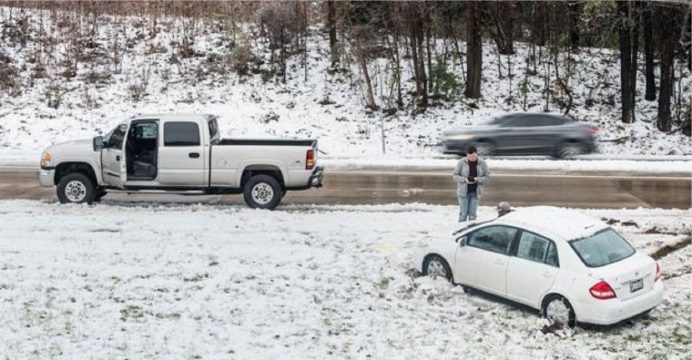 A heavy snowstorm has swept through the US’s south-eastern states, killing at least one person and leaving hundreds of thousands without power.

A state of emergency has been declared in North Carolina, with some areas reporting as much as 0.5m (18.5ins) of snow over the weekend, reports BBC.

One man died after a tree fell on his car. A search is underway for a driver whose vehicle was found in a river. Thousands of flights were also canceled across the region.

More than 300,000 people were affected by electricity outages in the Carolinas, Alabama, Tennessee and Georgia on Sunday, while storm warnings remained in place in the south-east “especially North Carolina and Virginia”, the National Weather Service (NWS) said in a tweet.

The storm was expected to move off the coast on Monday, although the NWS’s lead forecaster Michael Schichtel warned it would continue to be “a dangerous system”.

“It’s slow to move off the Carolinas but a saving grace is that it won’t hit New England,” he told reporters.

In some areas, so much snow fell the weight brought power lines crashing down.

But the main danger appeared to be on the roads. Almost 60 crashes were reported in Virginia, state police told local media, with the number rising to 500 in North Carolina between midnight and 11:00 local time on Sunday.

As a result, North Carolina Governor Roy Cooper told reporters the state’s “biggest concern” was not the snow but “ice making roads even more dangerous”.

The only death confirmed so far was outside of Charlotte. A second person was taken to hospital following the accident, WRAL.com said.

Several hundred miles east, in Kinston, divers were searching for another driver, whose tractor-trailer apparently crashed into the Neuse River.

Officials were alerted after debris was spotted on a bridge over the river, ABC12 said.