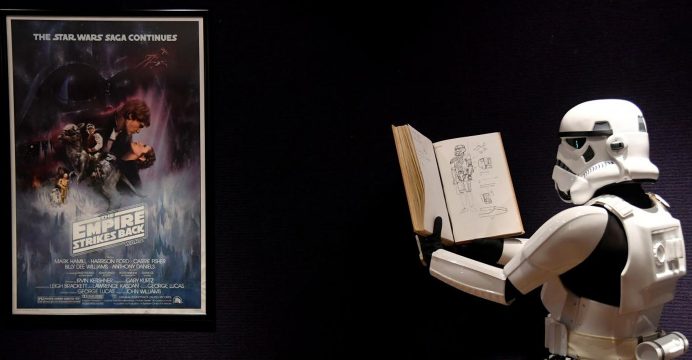 A sketchbook revealing early costume designs for Darth Vader, Luke Skywalker and other “Star Wars” characters is expected to sell for more than 100,000 pounds ($130,000) at auction in London next week.

“It is very rare to see anything (like this) come up at auction,” Katherine Schofield from Bonhams auction house told Reuters at a preview on Thursday.

The sketchbook is one of four that Mollo’s family are putting up for auction on Tuesday following his death last year.

Another featuring his designs for the “Star Wars” sequel “The Empire Strikes Back” and also including drawings for films “Alien” and “Zulu Dawn” is expected to fetch more than 80,000 pounds.

The two other books featuring designs for his other works, including “Gandhi”, for which he won a second Academy Award, are expected to fetch around 20,000 pounds each.